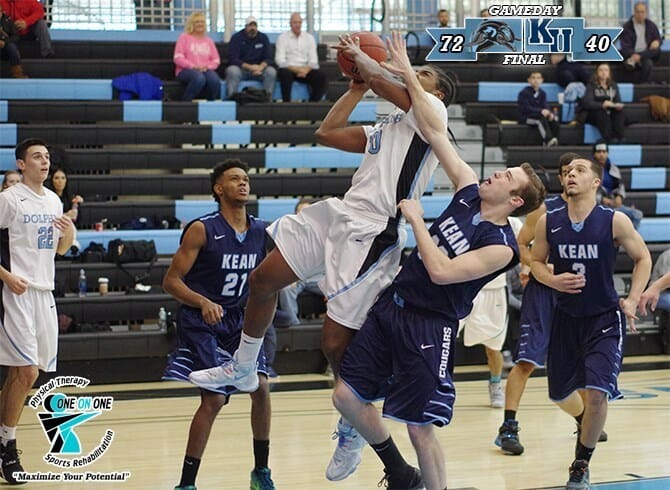 The College of Staten Island men’s basketball squad took on Kean University this afternoon at the CSI Sports & Rec Center in Staten Island, NY. The Dolphins, who have been rolling with a four game win streak, picked up their fifth straight win this afternoon with a historic 72-40 win over the Cougars.  The Dolphins improved to 13-4 overall while the Cougars drop their fourth straight and fall to 2-13 on the year.

CSI defeated Kean University for the 10th time in their history and for the sixth straight time.  Staten Island forced 16 turnovers which led to a 22-7 advantage in points off giveaways. The Dolphins shot just 4-of-15 from three-point range, three of which were drained by sophomore guard Edic Bracic, and committed 13 turnovers.

Senior forward Will Fonseca grabbed 14 rebounds (four offensive) and scored 23 points (7-12 FG) for his sixth double-double of the year. Senior center Thomas Delahanty played 20 minutes and scored 12 points (3-5 FG) and grab 6 rebounds split evenly.
The Dolphins struggled early on as they could never pull away from the struggling Cougars which led to the score being tied six times in the first half.  The men were shooting a frigid 19% for most of the first half which allowed the Cougars to stay slightly ahead.  It wasn’t until the waning moments of the first half that the Dolphins started to come alive.  Bracic sunk a three-point basket with no time remaining on the clock to send the Dolphins into the locker room with a 32-25 lead at the half.
Junior forward Khaleeq Baum, who has had a sting of double digit games, was quiet this afternoon, only dropping eight points while grabbing six rebounds.

CSI increased their shooting as a team in the second half to 44% from 32%. The men opened up the second half with a 19-3 run which put them 19 points ahead of Kean for a comfortable lead.

The Dolphins really used their size on the undersized Cougars and held a 34-18 point advantage in the paint. Jamal Hopper scored his first points of the year when he was fed the ball inside and converted an easy layup.

The Dolphins will return to action on Wednesday when they take on CUNYAC opponents Hunter College in the second half of a double header at 7:30 pm.