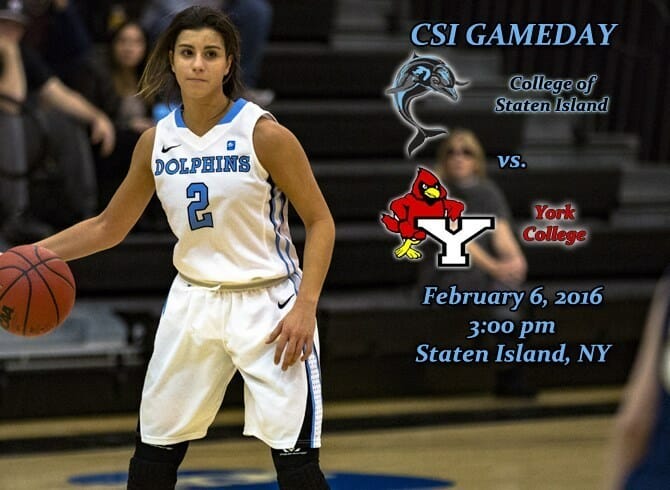 For the second time this season, the College of Staten Island women’s basketball team had a five-game winning streak snapped, and with that will look to get back into the win column today, when they host York College at 3:00pm at the Sports & Recreation Center as part of CUNYAC play.  The Dolphins are right in the thick of things at the top of the standings, and will need a big win today to continue to keep pace as the action finalizes in just a couple of weeks.

CSI vs. YORK COLLEGE AT-A-GLANCE
Matchup: CSI (13-7 overall, 9-3 CUNYAC) vs. York College (4-16 Overall, 2-10 CUNYAC)
Where:  Sports & Recreation Center – 2800 Victory Boulevard, Staten Island, NY
Tip-Off:  3:00pm
Live Video:  http://www.csidolphins.com/CSISportsNet
All-Time Series: CSI leads, 60-7
This Year’s Result: CSI defeated York, 84-62
Players To Watch (CSI):  Christina Pasaturo is coming off of back-to-back 21 point performances last week and will look to keep her foot on the gas today against York.  The last time these two teams met she canned 15 points, 13 of which came in the second half.  Nicole Vierno also scored 15 points in an injury-shortened 16 minutes of play.  She will look to get unhinged today as well.  Dolphins got 12 points on Tuesday against CCNY from Samantha Flecker.  She stands second on the squad with 15.1 points per game and first on the squad with 8.5 rebounds per game.
Players To Watch (YC):  The Cardinals will be banking on Angelika Ruggiano and Samantha Bond to get uncorked tonight.  Both are averaging 14 points per game.  Meanwhile Jigcara Grant is averaging an amazing 18.5 rebounds per game.  Look for her to get York second and third chances on the glass today.  Bond posted 24 points the last time these teams matched up and Grant collected an astounding 23 rebounds.
News & Notes:  CSI has been rolling in the series having won the last 11 games dating back to 2010.  At home, the Dolphins are even better, having taken the last 21 meetings dating back to 1994.  CSI is 31-2 all-time against York at home.  CSI shot the ball 56.5% from the floor the last time these teams met earlier in the season.  The Dolphins are awful hard to stop when they do that, having won their last 10 games when shooting 40% or better, and the team is 7-0 this season when connecting on 35% or better from beyond the arc.  CSI shot 7-13 from three-point range in their last meeting against York.  The Dolphins have to stay out of foul trouble if they want to have success.  The team is 2-6 this season when committing 20-plus fouls in a game, but when they have committed less than 20, they are 11-1.  York’s key to success is being able to force opponents into bad shooting.  The Cardinals are 4-1 this season when forcing opponents to just 33% or lower from the field but are 0-15 when they do not.