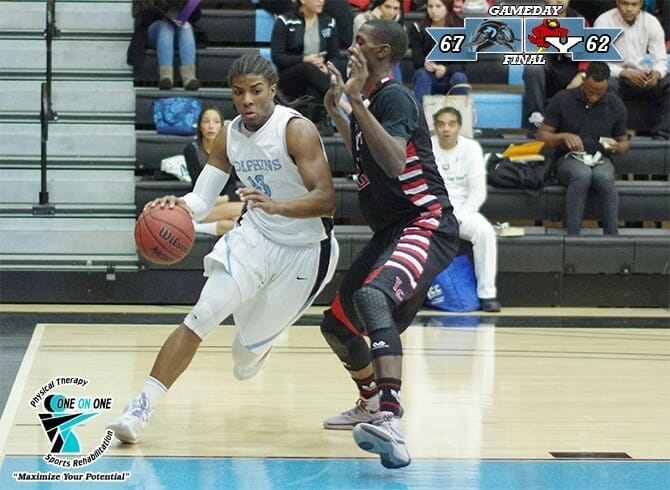 The Dolphins started the game on a 6-0 run over York College.  Frank Schettino, who was the first half high scorer with 15 points, was able to read the pass and pick it off and speed down the court for an easy fast break layup.  Rashaan Bailey and Chad Coachman would close the gap for the Cardinals after they were able to convert jumpers without an answer from the Dolphins’ offense.

Ryan Smart received a pass inside the paint and after Thomas Delahanty over committed, made a nice behind the back pass that found Bailey open under the basket for a wide open layup.  Delahanty would not let that happen quietly however as the Dolphins’ next possession Delahanty would grab an offensive board and strongly lay one up to give the Dolphins a 12-8 lead.

York College never let the Dolphins get too far ahead and hung around for the entire first half tying it up once with 5:20 remaining in the half after a pair of free-throws from Jean Joseph. Will Fonseca, isn’t one to be blocked heading to the rim, but was on one trip to the rim but was able to grab it and put it back up after it was blocked back into his hands.

Fonseca had 10 points on 50% (5-10 FG) shooting at the half to go along with his 7 rebounds. Coachman had seven points on 42% (3-7 FG) shooting with three rebounds. Both teams shot around the same with the Dolphins holding a slight edge at 43.5% compared to 42.9% from the Cardinals. Staten Island grabbed five more boards than the Cardinals for a 20-15 edge in that department.

The Cardinals came out of the locker room and were determined to cut into the Dolphins’ lead and grab their first lead of the game and were able to just that.  Staten Island scored just one point over a three minute span which allowed York to make headway and get their first lead after a 7-1 run.  The lead however would be short lived as Khari Rollock would drain a three-point shot to put the Dolphins back up by two.

The lead would go back-and-forth for the next two minutes as neither defense could stop the opposing team’s offensive attacks.  The Cardinals were able to break the back-and-forth action and take their largest lead of the game and go up four over the Dolphins.

With nobody able to gain a foothold in the game Fonseca put the Dolphins on his back and had an explosive second half where he would score 18 of his 28 total points. Fonseca would shoot lights out over the next five minutes going 5-for-6 from the field which ended with a statement three point shot to put the Dolphins up by five with 3:44 remaining in the game.

Coachman would bring the Cardinals within one after a pair of jumpers with 1:23 remaining in the game.  Schettino, after scoring 15 points in the first half, was held scoreless throughout the second half until there was 59 seconds remaining where he would hit a jumper to put the Dolphins up three and out of reach for the Cardinals.

Coachman would chuck up a desperation three with hopes to give the Cardinals a chance but it would rim out into the hands of Schettino to end the game.

The men are back in action on Tuesday, February 9 against Medgar Evers College and will be the third annual BLACK OUT! First 200 fans will receive a FREE black CSI Dolphins t-shirt!