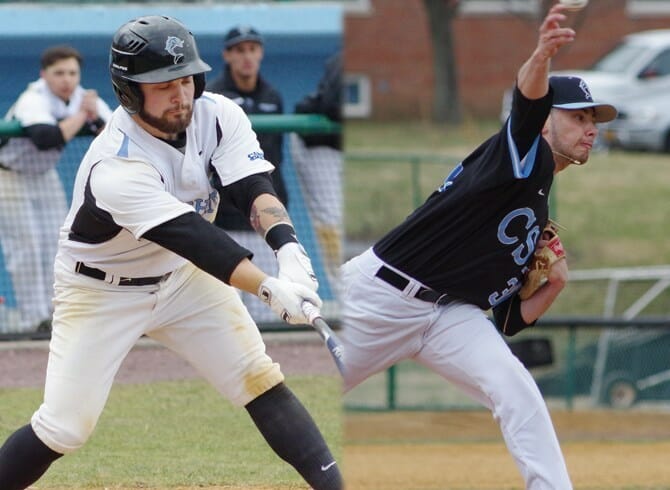 After a weekend stretch that saw them play four games, the College of Staten Island men’s baseball squad walked away with a pair of weekly awards from the City University of New York Athletic Conference, it was announced today.  Joe Palmeri was named the conference’s Player of the Week honor, while sophomore hurler Peter Bellina, who threw the first no-hitter in CSI history in 12 years, was named the conference’s Pitcher of the Week.

Palmeri hit safely in all four games this weekend, posting gaudy numbers.  The senior infielder batted an even .500 in the four starts, spreading out six hits in 12 at-bats, seven runs scored and seven runs batted in.  In Saturday’s doubleheader against St. Joseph’s College (BK), he posted a pair of doubles and a walk in a game one, 11-5, loss.  Against Yeshiva on Sunday, he powered a double and triple to go with a stolen base and three runs scored and three RBI in a 16-1 opening game win, then followed with another three-RBI performance in CSI’s follow up win.

For the season, Palmeri is batting .333, tied for second on the time with 10 hits.  He is slugging .567, posting five doubles and a triple to his resume.  He leads the team with 11 RBI and a pair of sacrifice flies.

First-year sophomore Peter Bellina is enjoying a tremendous start to 2016, following up a shutout performance last week against Muhlenberg with a complete-game no-hitter against Yeshiva on Sunday.  Bellina had a perfect game through six innings, but after hitting a batter and a CSI error, he did yield an unearned run, but CSI continued to prevail in the one-sided, 16-1, final.  Bellina struck out six batters, helping CSI end its modest two game losing skid.

Bellina is now 2-0 this season with a 0.00 ERA, having not allowed an earned run through 12.2 innings this season.  He has fanned eight batters, and opponents are batting just .068 against him.

CSI gets back in action on Wednesday, when they travel to face Manhattanville College in non-conference action for a single game at 3:30pm.