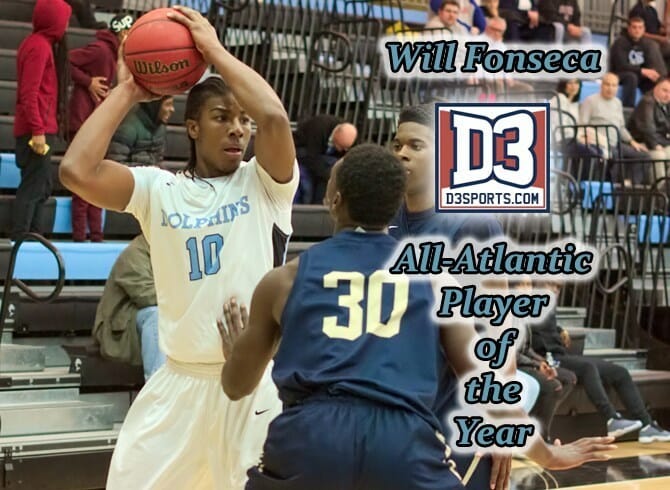 Having recently capped a fine senior season that saw him lead the College of Staten Island in points and rebounds for a second-straight year, Will Fonseca added to his list of accolades today with the D3hoops.com All-Atlantic Region Player of the Year honors. The award, voted on by Sports Information Directors at various schools, is the first for Fonseca, who was an all-star selection a year ago. This year’s laurel sees him sit atop the entire field of 16 players named to the region’s three teams.

Along with Fonseca, John Jay College’s Essien Epps was named the region’s Rookie of the Year, while Gwynedd Mercy’s John Baron was named Coach of the Year after leading the Griffins to a 22-7 record. Fonseca, the back-to-back CUNYAC Player of the Year, was named alongside fellow CUNYAC standouts Matthew Lee (Medgar Evers) amd Egzon Gjonbalaj (Brooklyn) on the All-Atlantic Region’s First-Team.

Fonseca is coming off of a terrific season, averaging 23.4 points and an even 10.0 rebounds this season, also leading the way with 25 blocked shots, while placing second on the squad in assists with 65. He finished shooting 47% from the field and 67% from the free-throw line, finishing 14th in the nation with 15 double-doubles.

The Dolphins’ run ended with the CUNYAC Semifinals and an 18-8 record, but not before Fonseca finished 4th all-time in scoring with 1,702 points in just three seasons. His 732 points scored a year ago were the most in CSI single season history, while his 608 this year rank 9th all-time.

The D3hoops.com honors are the first national honor to ring in for Fonseca this season. Fonseca will also be a candidate for ECAC Metro Player of the Year honors as well.

For a complete listing of all honorees, click here.