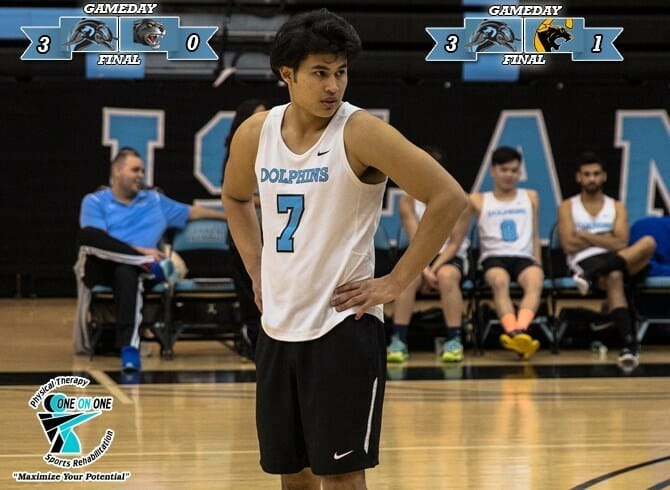 The College of Staten men’s volleyball squat took part in a non-conference tri-match today at Medgar Evers College in Brooklyn, NY.  The Dolphins came into the tri-match with a 9-game losing skid, tied for longest ever, but were able to snap that streak with a pair of wins this afternoon.  First up on the docket for the Dolphins was the Bearcats of Rust College in which the Dolphins were able to pick up a win with a 3-0 (25-12, 25-14, 25-15) sweep.  In the third and final match of the day against the hosting Cougars the Dolphins were able to put another tally in the win column with a 3-1 (20-25, 25-14, 25-22, 25-23) victory. The pair of wins increased the Dolphins overall record to 6-16 which ties the most wins in school history for the men’s volleyball program.

Match One: Staten Island 3, Rust College 0
Steven Caruso gave the Dolphins a 5-1 lead over the Bearcats in the first set against Rust College in which would turn out to be a career day for him.  Caruso would go on to finish the match with a career high seven service aces. Staten Island would stretch their lead to 9-3 which forced the Bearcats to call a timeout.   The timeout fueled the Bearcats to a 3-1 run to make it 11-6, however the men were able to extend their lead to 21-10 shortly after.  Song Shin Low was finding his groove from behind the line and was picking apart the Bearcats with his serves which cause Rust to use their final timeout of the set.  Adil El Haddad who set a CSI school record last time these two teams met with 8 straight aces sealed the deal for the Dolphins with an ace to put the Dolphins up 1-0.

In the last meeting earlier this year between CSI and Rust the Dolphins held the Bearcats to six points or less in each set.  This time around the Bearcats were much improved and ready for the Dolphins however it was still not enough to put them over the hump and get them their first win of the season.  The Dolphins and Bearcats were knotted at 6-6 early in the set before CSI went on a 6-0 run on the back of Khaleeq Baum’s four straight service aces. Rust College was able to claw their way back into contest late and shrunk the lead to just five. Baum’s height and athletic ability was just too much to handle for the Bearcats and it showed when he put the Dolphins on his back and scored two of the three final points needed for the Dolphins in the second game to put them up 2-0.

The third and final set of the day for the Dolphins against Rust was once again close early on but the Dolphins were able to pull away at the end. Kevin Rosero would give the Dolphins a nice lead midway through the set after he secured two service aces to give CSI a 18-9 lead.  El Haddad would the put the Dolphins one point away from victory when he was able to slam a shot off the floor.  Staten Island’s offense would stall after they hit 24, luckily errors plagued the Bearcats all day and Terrance Hart would give the Dolphins the win when he put his serve into the net.

Low made the most of his efforts in this match and hit .714 with six kills, second on the team, on seven attacks while tying for the top spot on the team with six digs.  Baum led the way with seven kills on 19 attacks and tallied a team high three blocks.  The Dolphins

The Dolphins would struggle against the Cougars in the first set of the match and would eventually give Medgar Evers their first set win over the Dolphins in the young history of the program.  Staten Island however would quickly find their form as they were a bit rusty after sitting out while Rust College and Medgar played their match. CSI held a 11-9 lead over the Cougars midway through the set before they allowed Medgar to go on a 4-0 run which gave them a 13-11 lead.  Staten Island was never able to comeback from that deficit although they were able to make it close towards the end when they went on a 3-0 to make it 23-20 but the comeback was cut short by a service error on Rosero.

Set two was a different beast for the Dolphins as they became focused and exploited the Cougars’ defensive mistakes enroute to a 25-14 victory. Low and Rosero were crucial in this match against Medgar Evers as they both tallied 15+ kills in the match.  Rosero’s 16 kills ties Mark Palencia’s record for most kills in a match in which was set last season against St. Joseph’s College – Brooklyn. The men would catch fire when the score was 12-10 in their favor as they would finish the set on a 13-4 run.

The Dolphins would stay hot in the third set and would take a 12-4 lead early on but would eventually cool off which allowed the Cougars to find a way back into the game. Medgar Evers was able to cover that early deficit and tie the game at 20 which forced Staten Island to call a timeout.  Coach Juan Lopez needed to settle his team down and just ensure them that they were still in control of this match and needed to return to what they were doing early on.  The Dolphins came out and did just that as Rosero would collect two kills to put the Dolphins up 23-20.  Brandon Lei rarely gets kills as he is the setter on the team and moves the ball with finesse however he was called upon to help the Dolphins secure their second straight win over the Cougars and did just that when he tricked his opponents with a sneaky tap over the net to secure the win for his squad.

The fourth set looked like a set that was going to force a fifth set and neither team could gain a foothold and really pull away.  Both teams knew what was coming which led to long rally’s which put extra wear and tear on the players and drained them of their stamina which is what caused such a close match.  The score was tied 22-22 when the Cougars went up 23-22 after Jamal Chance crushed one into the court.  The Dolphins would quickly respond however as Low would send a cross court shot to once again tie the set up at 23.  Chance would try to give his team the lead but would see his attempt hit the net and give the Dolphins match point. Rosero would not let the Dolphins lose this set and came down with the hammer to put the Cougars away and give the Dolphins their second win of the day.

Brandon Lei would tally 32 assists in the match while collecting 9 digs.  El Haddad, Rosero, and Low were all defensive masters and each collected 10+ digs in the match.

The Dolphins return to action on Tuesday, March 22 where they will return to CUNYAC action against CCNY at 7PM in New York, NY.