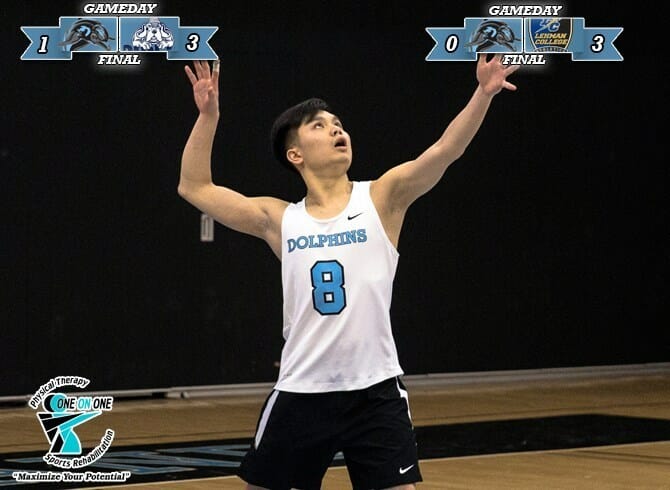 The Dolphins were led by Justin Edwardsen in today’s contest versus the Lightning with eight kills on 16 attacks and committed four errors. The Dolphins couldn’t seem to find their groove in the first match of the day as the loss to Pratt Institute on Thursday seemed to be stuck in their head.  Even Edwardsen’s return to the court was unable to ignite the Dolphins to a win over the Lightning.

CSI struggled mightily in this match as they hit -.135 as a team compared to .415 from Lehman College.  The men couldn’t figure out how to stop the duo of Orlando Vargas and Ramon Jimenez who hammered the Dolphins for 29 kills in the match.
Khaleeq Baum once again proved to be a nice addition for the Dolphins this season as he was the only other Dolphin giving any sort of offense as he tallied five kills on 10 attacks.  Baum was also a menace at the net and came up with seven blocks in the match.

The Dolphins’ woe’s followed them into the second game of the day. CSI was in the first set against John Jay only to come away with a 20-25 loss.  That loss however seemed to give the Dolphins a spark that they were missing all day which propelled them to a 25-22 victory in the second set to tie the match up at one.

That spark quickly disappeared as the Bloodhounds thrashed the Dolphins in the second set 25-7.  The Dolphins hit a match low -.395 and committed 18 errors which led the lopsided loss.  Kevin Rosero was the go to man this match as he was able to find openings and capitalize and collected seven kills, a team high, for his efforts.

CSI would head into the third set starting defeat in the eye but were unable to overcome its power as the Bloodhounds’ offense combined with the offensive woe’s by the Dolphins were just too much for CSI to handle.  The Dolphins would fall 25-17 in the final set of the day and pick up their third straight loss.

The Dolphins will return to action on Tuesday, March 29 at 7:00 pm where they will take on Medgar Evers College in their final home contest of the year.