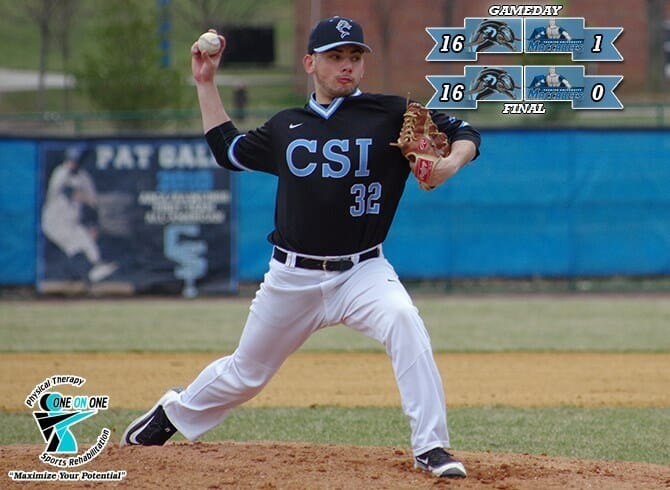 Joe Palmeri had another good pair of games going a combined 3-for-6 with six runs and collecting six RBIs. Anthony DiMarco only played in the second game and went 1-for-3 with three runs and two RBIs.  Peter Bellina threw the first no hitter for the Dolphins for the first time since April 24, 2004 where Nick Secchini threw one against Lehman College.

The Dolphins opened up scoring in the first inning with a pair of runs after Chris Moran singled down the left field line and then stole second base before Frank Smith was walked. Moran would score an unearned run after a fielding error by Zachary Perl at first base.  Smith would then cross home plate at the very next at bat as a wild pitch would bring him home to put the Dolphins up 2-0. Bobby Drake would give the Dolphins a third run in the bottom of the second inning after walking and then stealing second and third before being brought home by Nick Delprete.

The Maccabees couldn’t get anything going offensively as Bellina was lights out with his pitching and not allowing Yeshiva to get a solid hit that would trouble Bellina’s defense.  The error bug plagued the Maccabees as they would commit a total of 9 errors, five of which came in the sixth inning.

Staten Island had a modest 5-0 lead over Yeshiva heading into the sixth inning but exploded for 11 runs to go up 16-0. The scoring onslaught started when Rephael Rosenberg was brought in to pitch for the Maccabees and gave up 11 runs on just three hits.  Palmeri would hit a two RBI single through the left side to get the first two runs of the inning on the board.  The errors would then come into play as Drake would reach first on a fielder’s choice but was able to turn and make it to second after the shortstop missed his mark.

Bellina would have his perfect game squandered after his first pitch of the seventh inning hit the batter and sent him over to first base. Yeshiva did find a way to get on the board after an error by Frank Sconzo allowed Perl to reach second base and also scored Elan Paul who had reached on a fielder’s choice earlier in the inning.

Bellina (2-0) would finish with six strikeouts and faced 23 batters in the first game.

Chris Karnbach (2-0) got the start on the mound for the Dolphins in game two and would pitch 6 1/3 innings before giving the ball up to Terrance Mulligan.

Game two had the showing of a pitcher’s duel early on as through just three innings the Dolphins only had a 1-0 lead.  The lone run scored early on was put up on the board when Palmeri doubled to left center and brought home Smith.

The Dolphins refused to let this game remain close as they brought out the bats through the next three innings scoring 15 runs on six hits.  The Dolphins’ offense thrived in the second half of this game as the Maccabees committed just four errors compared to 9 in the first game. The sixth inning was capped off by Palmeri hit his first triple of the season to left center which brought home Smith and Glenn Glennerster.

Karnbach had a no hitter going but lost it when Paul hit a double to left center which was the only hit for the Maccabees in either game.  Mulligan would come into the game and strikeout one batter as he finished the game for the Dolphins to finish off the day with a win.

The Dolphins return to action on Wednesday when they travel to take on Manhattanville at 3:30 PM.