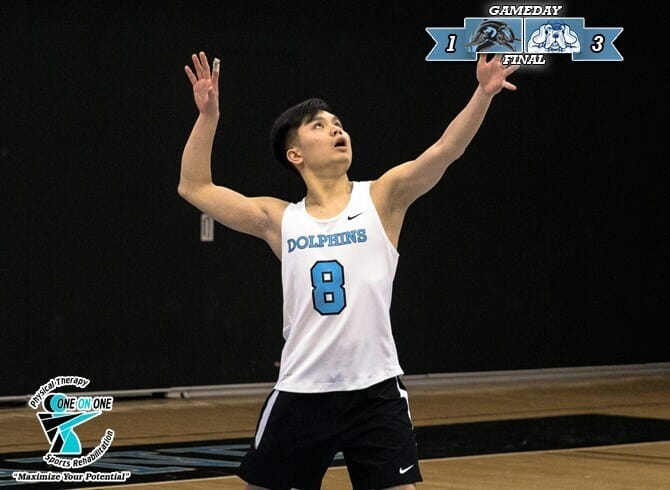 In a well-contested matchup the entire way, John Jay College scored a 3-1 winner over the College of Staten Island in men’s volleyball CUNYAC action tonight at the Doghouse n Manhattan.  The win moved the Bloodhounds to 12-6 overall and 9-2 in the CUNYAC, while CSI fell to 4-15, 2-9, respectively.

After falling behind, 7-1, in the opening set, CSI powered back thanks to a 16-9 stretch that finally gave the Dolphins a 21-20 lead in the opening set.  Justin Edwardsen had three kills in the stretch.  Later, JJC struggled at the net with three attack errors, leading to a 25-22 CSI win in the opener.

JJC once again pounced early in the second set, taking a 4-0 advantage, helped by a Francisco Miranda kill and Michael Chabla ace.  CSI cut the deficit to 8-7, but the Bloodhounds responded with an 11-4 run, taking control.  The same script followed in set four, when JJC raced out again to a 4-0 advantage.  From there, JJC led wire-to-wire to cruise to a win.

A big, 6-2, run by CSI in the fourth set, got the Dolphins going, highlighted by another Edwardsen kill and an Adil El Haddad ace.  Another ace by El Haddad later, helped CSI build a huge, 18-11, lead, but from there the Bloodhounds caught fire, at one point posting six straight points to help them finish on a 14-4 run to end the match.

Jack Pelleschi led all scorers with 23 kills for JJC to go with four blocks.  Juan DeJesus posted five aces, 23 assists, and 17 digs.  For CSI, they were led by Edwardsen’s 11 kills, followed by Kevin Rosero’s eight.  El Haddad let with four aces, while Edwardsen led in blocks with three and 17 digs.

CSI will now return to action on Thursday night, when they host Hunter College at 7pm.