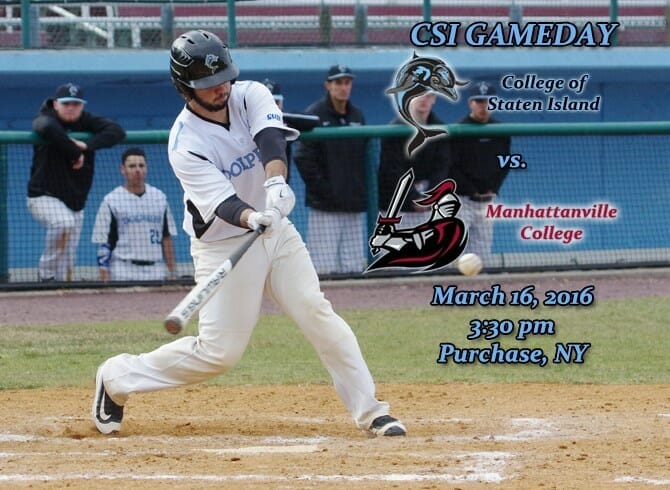 The College of Staten Island baseball squad will hit the road today to take on Manhattanville College in a single 9-inning game at 3:30 pm in Purchase, NY. The Dolphins are on a two game win streak after convincing wins over Yeshiva University over the weekend and will look to pick up their third straight this afternoon.

CSI vs. MANHATTANVILLE COLLEGE AT-A-GLANCE
Matchup:  CSI (7-3 overall, 0-0 CUNYAC) vs. Manhattanville College (4-5 Overall, 0-0 MAC Freedom)
Where:  Manhattanville Field – 2900 Purchase St., Purchase, NY
First Pitch: 3:30 pm
All-Time Series: CSI leads 31-16
Last Year’s Result:   Did not play
Players To Watch (CSI): Joe Palmeri is off to a hot start in 2016 and recently broke the CSI school record for assists with 364 which passes the old leader Tom D’Angelo who had 360 and played from 1994-97.  Palmeri is batting .333 on the year and leads the Dolphins with 11 RBIs. Nick Delprete is also off to a nice start and is .364 at the plate with a team high 12 hits and a .475 on base percentage. Delprete leads the team with 30 assists and is second on the team with seven runs scored.
Players to Watch (MC):  Luke Scoggins leads the Valiants with a .462 batting average as well as 9 RBIs through the seven games he’s played in. Scoggins also has a team high .923 slugging percentage to go along with two triples which also leads Manhattanville. On the mound John Moschetti has a 4.22 ERA and a 1-0 record through 10.2 innings pitched so far this season.  Moschetti has also tallied five strikeouts and six walks through two starts this season.
News and Notes: Staten Island has defeated Manhattanville College in three of the last five meetings.  The two most recent meetings in 2013 and 2014 were relatively high scoring affairs as the Dolphins bested the Valiants in both games by scoring 17+ runs in each contest.  When the Dolphins bat .260 or better they have yet to lose a game this season and are 5-0 and are 2-3 when they bat .259 or less.  The Valiants are hitting .325 as a squad compared to .273 for the Dolphins.  So far this season the teams share a common opponent in Muhlenburg College in which the Dolphins beat twice whereas the Valiants lost their lone game against them.