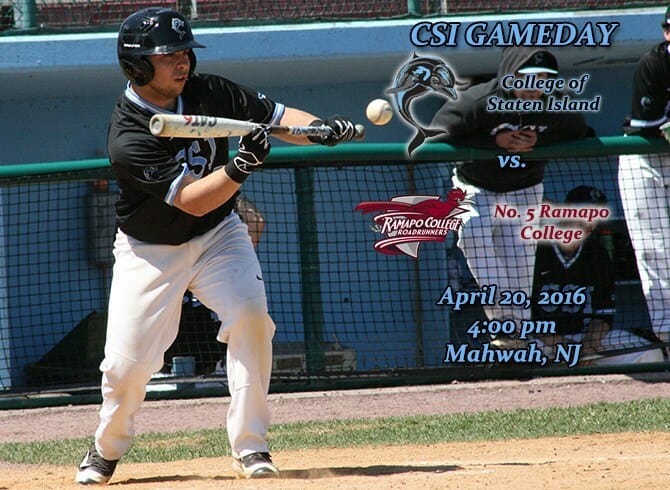 The College of Staten Island baseball team is riding an eight game winning streak coming into today’s game against No. 5 ranked Ramapo College.  The Roadrunners were ranked as high as no. 1 in last week’s poll but after dropping a pair to NJAC opponents Stockton they have since fallen to No. 5.  Staten Island is coming off of an impressive display of hitting against Drew University last night which led them to a 13-4 victory.

CSI vs. NO. 5 RAMAPO COLLEGE AT-A-GLANCE
Matchup:  CSI (19-9 Overall, 4-0 CUNYAC) vs. No. 5 Ramapo College (24-4-1 Overall, 7-3 NJAC)
Where:  Ramapo Athletic Center – 505 Ramapo Valley Road, Mahwah, NJ
First Pitch: 4:00 pm
Live Video: http://www.ramapoathletics.com/watch/?Live=66
Live Stats: http://www.sidearmstats.com/ramapo/baseball/
All-Time Series: Ramapo leads 16-11
Last Year’s Result:   Ramapo won 15-3
Players to Watch (CSI): George Kantzian has been tearing it up over the Dolphins’ eight game win streak, batting .400 all while collecting 9 RBIs and hitting four doubles.  Kantzian has hit 17 doubles this season which places him in second place behind Donald Gossett who had 19 doubles in a single season back in 1981. Kantzian also leads the nation in doubles per game with .74. Joe Palmeri continues to rake in the RBIs and has tallied 26 this season, 9 of which have been hit over the Dolphins’ eight game win streak.
Players to Watch (RC):  Joe Venturino is batting .431 on the year with 19 RBIs, 44 hits, and eight doubles.  Venturino ranks 27th in the nation with his .523 on base percentage. Brandon Martinez is the power hitter for the Roadrunners and has four home runs this season, which lead his team however, he has gone just 2-for-10 over his last three games.
News and Notes: The Dolphins are just 2-8 against the Roadrunners over the last 10 meetings with the most recent win coming from the 2006 season when they defeated Ramapo 7-4 at Ramapo’s home field. Staten Island is 6-9 when playing at Ramapo’s home field and will hope to extend their win streak to 9 in a row this afternoon as well as pick up another away win against the Roadrunners. Over the Dolphins’ eight game win streak they are hitting .361 as a team which is well above their .311 season average. Over that same stretch of games the Roadrunners are hitting just .216 which is below their season average of .301.