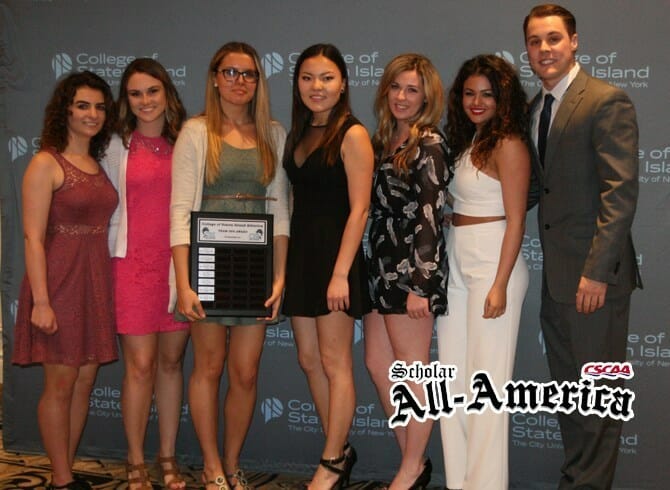 Academic honors continue to pour in for the College of Staten Island, and this time it was both Men’s and Women’s Swimming and Diving units earning Scholar All-America team citations from the College Swimming & Diving Coaches Association of America (CSCAA).  A total of 388 colleges and universities were represented spanning all NCAA Divisions comprising a total of 658 teams, one of the highest totals ever, a testament to the sport’s increased performances in the classroom.

It was the second-straight semester that the CSI women earned on to the list.  As a team the unit boasted an incredible 3.33 GPA during the spring academic semester, the 104th highest in Division III.  As a team the GPA is a hair under the team’s cumulative GPA of 3.34, which in May earned them the prestigious Team GPA award at the CSI Athletics Awards Banquet for the second straight year.

“I am very proud of how our teams approach their performance outside of the pool,” said Head Coach Michael Ackalitis.  “That same great work ethic translates in the pool as well and they use it as a springboard for their success.”

The same holds true for the men’s unit, which earned on to the CSCAA list this past semester by accumulating a team GPA of 3.04.  The Dolphins also plenty of hardware in the pool this past season by taking home their third-straight CUNYAC Championship with appearances at the ECAC and Metropolitan Swimming Championships along the way.

“There is always a wish to perform at your best on the field of play, but our students know that being a student-athlete means being a student first,” said Ackalitis.  “It is very rewarding to see our athletes highlighted for their achievements in the classroom.”

To be selected as a CSCAA Scholar All-America Team, programs must have achieved a grade point average of 3.00 or higher over the Spring semester.  It is only the second time in the program’s 30+ year history that more than 600 teams were honored.  Founded in 1922, the College Swimming Coaches Association of America (CSCAA) – the oldest organization of college coaches in America -is a professional organization of college swimming and diving coaches dedicated to serving and providing leadership for the advancement of the sport of swimming & diving at the collegiate level.