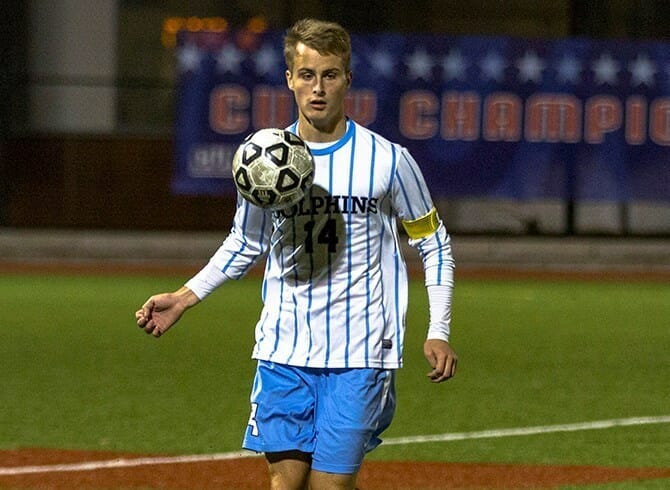 The College of Staten Island men’s soccer program will be the first team to kick off its season, and when it does it will hold the promise for championship aspirations amidst the backdrop of many changes in 2016.  The two-time defending CUNYAC Regular Season Champs came up short in tournament play, and for fifth-year Head Coach John Tardy, no matter how much the roster has turned over, the goal will remain steadfast, maybe more this season than in the past.

“It was disheartening to lose in the Final last year,” tells Tardy.  “I think coming in the mindset for the coaching staff, the players, even the new ones, is that we have confidence in our ability.  The team is really buzzing and everyone here feels we should be looking towards a championship and an entry into the NCAA national tournament.”

The Dolphins should be sitting pretty as overwhelming favorites heading in, having only graduated two seniors from 2015’s installment, but the offseason was a long one for the Dolphins, and the team lost a total of 13 more would-be returners this season, including CUNYAC Rookie of the Year Brayan Evo, and team MVP Emmanuel Agboola.  Dynamic freshman Tarek Emam was lost to a professional contract in Egypt, and budding sophomore Philip Lefkowitz was lost early this preseason with injury.  Tardy is upbeat about the future, but no matter how hard he tries to shake it, the offseason defections are a difficult pill to swallow.

“We lost players for a variety of reasons and its disappointing because a couple of key components from last year didn’t do what they needed to do, and that hurt us the most,” Tardy explained.  “But on the other hand we look at what we have now and we feel we have a better team than we did a year ago.  There’s no question we’d be deeper and better had we had everyone back, but we have to take it for what it is.  No one is going to feel sorry for us.  We are focused and ready to go to work, approaching soccer with the correct mindset and attacking these challenges.  We’re over the losses, and now it’s time to play.”

Normally, the roster shakeup this offseason would cripple most teams, but as Tardy reinforced the Dolphins remain steadfast in their pursuit of a CUNYAC title, and he has good reason.  The team is returning a strong nucleus, comprised of seniors Ruben Diaz, the defending CUNYAC Defender of the Year, CUNYAC all-stars Nermin Kurtesi, Ilir Papraniku, 2015 leading goal scorer Marcin Klim, stalwart defender Jacob Szumanski, and junior Vasyl Fedortsi.  No matter what the surrounding cast, Tardy feels his upperclassmen, which includes midfielder Peter Hanna returning from injury, is as good as it gets.

“It’s exciting because this is my first true full recruiting class, and all of these guys came expected to shape our program and build it to what it is now,” Tardy spoke of his leaders.  “They bought into the philosophy and what we are trying to do as coaches.  They take pride in that they have built and they show that through their leadership and work rate.  Many of them realize it’s their last chance to make their piece of CSI Dolphin history and they want to do it in a positive way.  I’m very excited for them to be able to do that.”

The collection of returning faces will be joining a crew of new talent that Tardy contends is the best in his five years at the helm, not only in physical performance, but in leadership and soccer IQ.  Look for newcomers like transfer Adrian Cosovic to join freshmen Ryan Laymen, Juan Candela, Chris Li and Mike Arellanes to crack the lineup on any given day, and players like goalkeeper Jake Foeldes to provide highlight reel material.  Even the new faces that are tasked with providing depth are being banked on to carry the squad in the future and Tardy is adamant that everyone will be critical to the team’s success this season.

“I think all of our new talent can play right away and challenge any starter in our lineup.  We’ve seen it in practice and in scrimmages their ability to show well and not just play well, but play well together.  They bring a great and exciting brand of soccer, have great smarts out there on the pitch, and I expect them to be all out there producing and challenging for minutes, making everyone better.”

The blend of old and new should provide for plenty of excitement this season.  Tardy expects the mix to play a controlled, defense-oriented game, with the intentions to possess with purpose and seize on offensive opportunities.

“We had success last year with that approach and we will continue to play that type of style,” Tardy said.  “The most important part is that our team understands that style and plays it well, and individually we have guys that can create with the ball and make things happen.  We can turn the field and switch play pretty quickly.”

With only a small handful of preseason dates to prepare, Tardy is hoping the unit gels quickly.  One thing the Dolphins have struggled with under his leadership have been slow starts.  In the past three seasons, CSI has posted just an 8-20-2 mark in its opening 10 games in each of those seasons.  CSI is a combined 21-9-2 after the 10-game mark in that same span.  Much of that has to do with the caliber of opponents Tardy schedules, but that aside, he wants his teams to be crisp out of the gate and has made that a focus this season.

“The one trademark we enjoy is playing stiff competition early on so that it opens us up to play better down the stretch and for the most part that has worked for us,” the coach explained.  “That said, no matter who we play, we expect to win.  Our schedule is not as rigorous as it has been but we are still playing some Top 25 programs and we expect to be ready physically and mentally and start the season stronger than we ever have.”

Start to finish, Tardy expects his team to compete throughout.  Despite CSI’s positioning as the favorite last year, Tardy’s one major goal for the season was to actually play in a CUNYAC Championship, something that had eluded the team in previous seasons.  With that mission having been accomplished a year ago, it’s natural for the coach to envision bigger and better things in 2016.

“I think anything less than an NCAA appearance is going to be a disappointment,” he admitted.  “We know what it takes to get to the Championship and to see what these players have done: captain’s practices all winter and summer, strength and conditioning, being around one another.  Our season started the day after we lost the Final.  They put the work and the time in and I’m hoping shows this year and gets us over the hump.”

CSI will start its season on the road, travelling to Farmingdale State on Thursday, September 1, before a two game home swing Labor Day weekend against Purchase College and Yeshiva University.  They return home the following weekend for a set against Rowan University and PSU-Behrend before opening up the CUNYAC portion of their schedule on the road against defending-champs CCNY on September 17, the same team that ousted CSI in the Final a year ago, 2-1, in overtime.

“We are definitely looking forward to getting started,” Tardy said.  “This has easily been the best preseason as far as guys being fit and game-ready and the intensity of our training sessions have been off the charts.  Our team chemistry has been outstanding and you can just feel there is something special in this group.  We can’t wait to get started.”

All CSI home games this season are free and PG-CLUE Certified for all students.  Home games will also be video-streamed live and in HD through CSI SportsNet at www.csidolphins.com/CSISportsNet and will live statistical feeds provided as well.  Be sure to consult the CSI Men’s Soccer Schedule Page for more information.