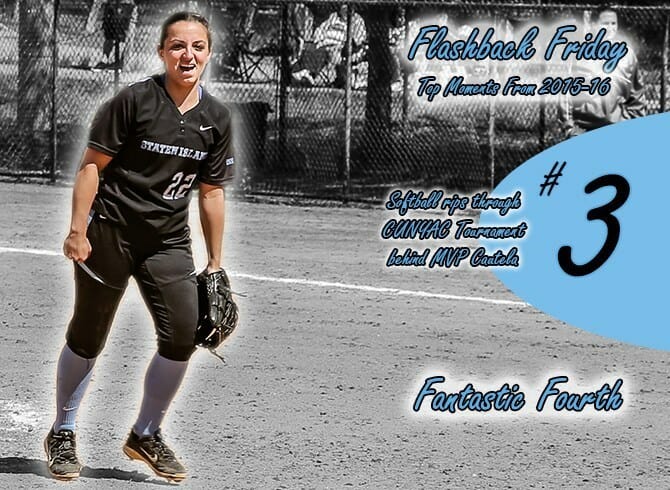 Flashback Friday looks at the top moments from the 2015-16 athletic year at the College of Staten Island.  We are in our top three, and we begin with the No. 3 moment, the CSI Softball squad’s rip through the CUNYAC Tournament that culminated with their fourth-straight Championship on their home field this past May.  Junior pitcher Jacqueline Cautela fueled the fire, tossing a pair of no-hitters in CSI’s three-game tear.

#3 – Softball rips through the field to secure fourth-straight CUNYAC Championship
Date:  May 8, 2016
Who:  Women’s Softball
Where: CSI Softball Complex – Staten Island, NY
What Happened:  As the tournament’s top-seed and hosts, CSI was certainly looked at as a favorite in the six-team Postseason Tournament, but the Dolphins left little to doubt on Mother’s Day weekend, powering through the field to win three games by a combined tally of 18-0 to secure their fourth-straight CUNYAC Championship and 17th overall, guaranteeing them a return to the NCAA Division III National Championship Tournament.  The run started with a five-inning, 8-0, blanking of Lehman College, highlighted by junior pitcher Jacqueline Cautela, who struick out 13 batters and was a walk away from a perfect game, tossing the no-hitter while also going yard with a two-run homerun.  Later that afternoon, CSI scattered eight hits and overcame a trio of errors to score a modest, 2-0 win over Hunter College, earning a passage directly into the Championship Game the following day.  Less than 24 hours later, CSI scored six runs in the first inning in what was ultimately an 8-0 win over Hunter in a game-shortened five innings.  Cautela scored the first run of the game on a bases-loaded walk issued to Kristy Colangelo, and that was all the hurler needed, as she would go on to fan four and hold the Hawks to only a pair of baserunners.  For her efforts, Cautela was the landslide choice for MVP.  She pitched 10 scoreless, no-hit innings, fanning 17 batters next to just three walks, and added four runs scored and an on-base percentage of .400 at the dish.  CSI would go on to represent at Regionals, ultimately finishing the season with a record of 26-14. Q&A…with Jacqueline Cautela
You’ve known nothing but championships since you’ve been to CSI and coming in you had to be tabbed as the favorites.  Is it a good thing to have that pressure on you coming into the season?  I think it’s great to have that pressure on me because it sets my expectations very high for myself. It pushes me to work harder and harder each year.

The team played well all season and only lost one conference game all-year going into the tournament.  How confident were you guys coming in that you could repeat as champions, especially on your home field?  Our biggest goal for the season was to get that four-peat and that’s exactly what we did. Our team really deserved this. We worked hard all season long and never gave up in any game and always battled. It is an even better feeling to win a championship on our home field because we have the support of our families, friends, and teammates.

The start to the season had to be so frustrating with all of those rain-outs, you went almost three weeks without playing a single game.  Does that harm your ability to be at your best come late-April?  It was definitely frustrating having every game rained out for a period of time, but that did not stop us from working hard and reaching our goals. Despite the circumstances, we made the best of the situation and continued to practice everyday.

By the time you faced Hunter in the Championship (twice) you had some familiarity against them.  Do you approach those games against them differently than you would another opponent?  We played Hunter a couple of times this season and I started to become familiar with how I approached each batter after facing them a couple times this season. I don’t approach those games any different, I come out hard and strong every game no matter who the opponent is. ???????

You were sensational in each game against them, what were you doing to keep them off-balance and their bats quiet throughout the tournament?  I started to become more confident in my pitches. I started to throw my change up more often and I believe that worked. I feel like as the season goes on I get stronger and stronger each game. By the time the playoffs and the championship come around I feel like I am at my strongest. It helps a lot when I know I can count on my defense to make the plays behind me and our offense to produce runs for support.???????

Not only were you dominating them in the circle, but you and your teammates got some big hits and were able to jump on them offensively.  What were some of the things the team was doing well at the plate that helped you offensively?  I believe the most important thing in the game of softball is to score first. Having the lead early in the game definitely takes some pressure off of us defensively. It sets the momentum of the game and pushes us to keep moving forward.???????

On a team with so much talent you were named the Tournament MVP for the third year in a row.  What does an honor like that mean to you, knowing that when the games mean the most, you’ve been able to raise your performance?  Winning the Tournament MVP again was very rewarding. It is a reminder that all my hard work pays off. It feels great to feel your strongest during the most important part of the season.

You still have another season left and so many pitching (and hitting) records are within reach for you.  Do you think about that type of stuff and have you had a chance to put into focus the amazing career you have had so far?    I just go out there and give every game my all. I don’t think about the statistics or the records that I could be breaking. I just enjoy the game and play every game like it’s my last because one day I will have nothing but memories to look back on. ???????