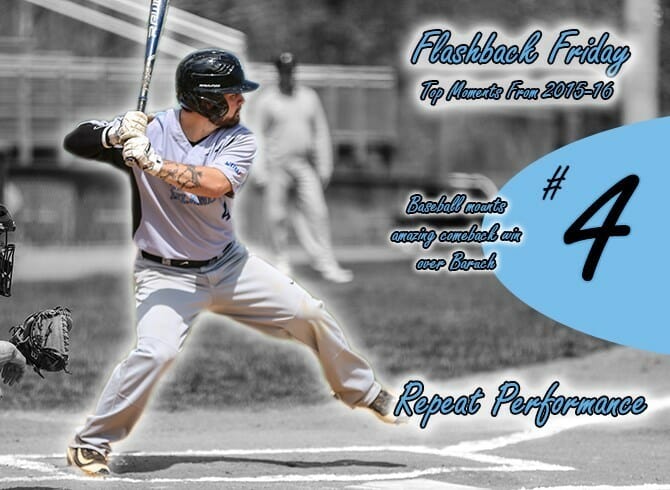 Flashback Friday looks at the top moments from the 2015-16 athletic year at the College of Staten Island.  August rolls in with the No. 4 top moment, CSI Baseball’s amazing come-from-behind win over Baruch College in the CUNYAC Championship Tournament, 10-9, in early-May.  The Dolphins were down, 9-4, heading into the final frame, scoring five in the 9th and another in the 10th to score the win.  It was a repeat final score of last year’s unprecedented Dolphins Comeback against Baruch College.

#4 – Men’s Baseball secures amazing comeback in victory over Baruch at CUNYAC Tournament
Date:  May 7, 2016
Who:  Men’s Baseball
Where: CSI Baseball Complex – Staten Island, NY
What Happened:  CSI and Baruch College both won their opening round CUNYAC Tournament games, pitting the two teams against one-anothers as part of a Winner’s Bracket Final contest played at the College of Staten Island.  The game was an important one, as the winner would gain and automatic berth into the Championship Final the next day while the losing side would need to win three straight games in two days coming out of the loser’s bracket for a chance at the title.  Both teams therefore gave the game ball to their ace pitcher, and in the early rounds, it was Baruch’s Cameron Kitt that had the better way of it, as the Bearcats built a 6-2 lead after six innings. The southpaw saw his unit improve the lead to 9-4 heading into the final inning.  The game had a familiar feel from the Championship game the year before, when Baruch brought a four run lead into the last inning, then went up by three runs again in extra frames only to see CSI come back and win, 10-9.  The irony continued when CSI launched a feverish comeback that saw them scatter five runs on four hits in the 9th, chasing Kitt and setting up extra innings.  Bobby Drake erupted the team with a two-out, two-run double to tie the game, sending the fans to its feet.  One inning later, CSI reliever Jason Failla wiggled out of a jame after allowing a leadoff double, and CSI went back to work in the 10th.  Frank Sconzo started things off witha  single and after taking second on a passed ball, was moved over to third base on a Joe Palmeri groundout.  That’s when Frank Smith came up with two outs and launched a blooper into right field that touched down and easily allowed Sconzo to score, giving the DOlphins the walk-off win for the second year in a row against Baruch.  The momentum carried over to the following day, when CSI breezed to a 13-5 win over Baruch in the Final, giving the Dolphins their 17th CUNYAC title.

Q&A…with Joe Palmeri
The team played well all season and only lost one conference game all-year going into the tournament.  How confident were you guys coming in that you could repeat as champions?  We were real confident going into the playoffs. We knew that if we just hit a little bit our pitching would do the job. It wasn’t going to be easy but if we did the little things right we could bring another championship back to CSI.

There is no question that Baruch is your biggest rival in the CUNYAC, and they were the only team to beat you during the regular season.  How did you approach that winner’s bracket game going in?  Coming into the winners bracket game we knew it was going to be tough. We all knew if we just played our game the way we knew how to play we would have no problem.

This game had an eerily similar feeling to last year’s championship.  Baruch got ahead early, and touched one of your aces up for six runs through the first six innings and you guys couldn’t seem to get that big hit offensively.  Was that frustrating for you guys?  It was extremely fustrating. We really couldn’t get anything going. We needed that one big hit but it wasn’t coming to us early in the game. Coach Mauro was telling us that we were playing for one run an inning and that was what our mindset was like at the plate, guy gets on move him over anyway you could.

Their ace pitcher Cameron Kitt threw something like 140 pitches and he kept your team off-balance the entire season when he pitched.  What made him so effective in the first eight innings of the game before you started to wear him down?  Kitt was just able to hit his spots effectively. We knew he would be a tough pitcher to face from the beginning of the game. That’s why we kept telling ourselves that we would have to minimize the mistakes at the plate. His pitch count was so high and we knew he would eventually get tired.

You enter the 9th down 9-4 and you know you are guaranteed an at-bat in the inning.  What’s the mindset going into that inning.  Is there any sort of panic there?  Get on base. That’s all I was trying to do. Let everyone work there way on. There was a little bit of a panic because we were down 5 runs but we all just kept it cool and relaxed because we been in this situation before.

Your infield hit was a big one and swung momentum loading the bases with no one out.  At what point specifically do you feel, “wow this might be happening again”?  When you get that hit?  When you score to make it 9-7.  When does that confidence and swagger come back?  It definetly was bringing back some memories. I was saying to myself this just might happen again when I got on. Once I saw we were in Kitts head I knew everyone was going to be a tough out. We kept fighting and it eventually paid off.

Bobby Drake gets a huge hit to tie the game in the 9th.  What’s going through your mind knowing that same as last year you’ve managed to do the impossible?  You had to feel that Baruch was reeling and on the ropes, right?  Bobby had been in that situation before and he knew what he had to do. I was confident that he would do his job and he did with that huge hit.  If we just put the ball in play, we knew Baruch was getting a little overwhelmed to what was going on.

After the inning the score is still only tied until Frank Smith gets the game-winning hit the next inning. It had to be a great moment for you guys and after a win like that you had to be on top of the world.  How did it propel you to the Championship the next day over the same team?  With a win like that it just turned up the momentum going into the championship game. We knew they were low on pitching and we had the available pitching going into the game. It still wasn’t going to be easy but we all played relaxed and did what we had to do. It was great to repeat as champions once again and a great way for the seniors to end their baseball careers.