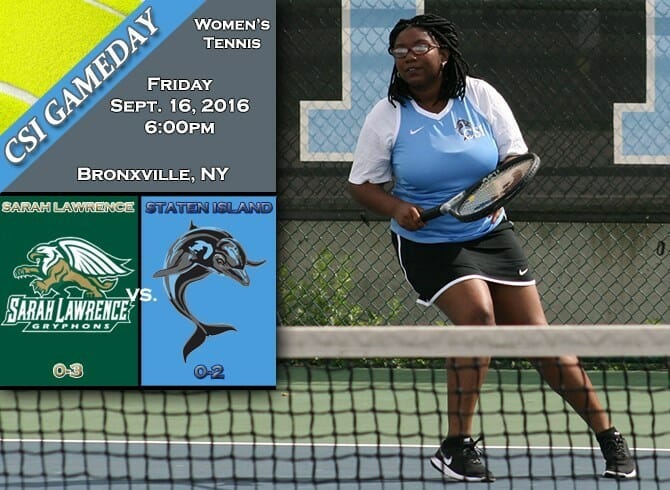 The College of Staten Island women’s tennis team is back on the courts after a long lay-off, travelling to Sarah Lawrence College to take on the Gryphons at 6:00pm as part of non-conference play.  Both teams will be looking for their opening wins of the season tonight under the lights.

CSI vs. SARAH LAWRENCE COLLEGE AT-A-GLANCE
Matchup:  College of Staten Island (0-2 Overall, 0-0 CUNYAC) vs. Sarah Lawrence College (0-3 Overall, 0-2 Skyline)
Where:  Sarah Lawrence Courts – 16 Ledgewood Road, Bronxville, NY
First Serve: 6:00 pm
Last Year’s Result:  CSI won, 7-2
Players to Watch (CSI): Senior Michelle Kushnir has logged CSI’s only win on the young season in Singles play and dropped her opener via a third set tiebreak.  This is a great sign considering that the senior has advanced two pegs in the lineup this season and is playing very good tennis.  Aziza Jurabaeva made her 2016 debut in CSI’s last meet against Yeshiva, and will look to anchor the No. 3 position.  Nozima Toshpulatova in the No. 1 position will be looking to bank her first victory today as well.
Players to Watch (SLC):  The Gryphons will be looking for their anchors in the middle of the lineup to carry strong play tonight.  Juliet Slade is 1-2 overall in the No. 3 position, while Lena Labayen is looking to improve on her 1-0 standing at the No. 4 position.  Slade has paired with Moni Spancheska for a 1-1 doubles record at the No. 2 position.
News and Notes: This will be the third meeting between the two schools since 2010, with the Dolphins having won both previous meetings by identical 7-2 scores.  The Dolphins are trying to avoid their first 0-3 start since 2009, when they started 0-4.  The Gryphons are looking to avoid a four game slide.  The last time they started 0-3 was back in 2000.  The last time SLC did not score a win in their first four matches was back in their first season back in 1989, when they started 0-5-1.