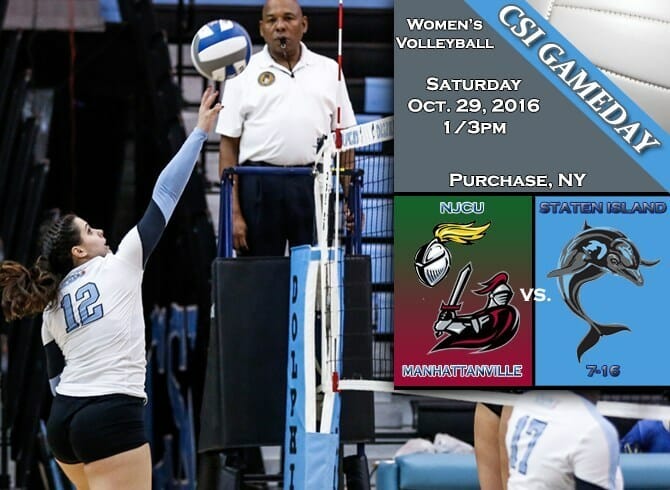 The College of Staten Island women’s volleyball team will take to the road for the third day in a row and head to Purchase, NY to participate in a tri-match at Manhattanville College.

CSI vs. NEW JERSEY CITY UNIVERSITY / MANHATTANVILLE COLLEGE AT-A-GLANCE
Matchup:  College of Staten Island (7-17 Overall, 3-5 CUNYAC) vs NJCU (14-13 Overall, 0-8 NJAC) / Manhattanville (15-8 Overall, 4-3 MAC Freedom)
Where:   Manhattanville College- 2900 Purchase St. Purchase, NY
First Serve: 1pm
Live Stats: http://www.sidearmstats.com/manhattanville/wvball/
Live Video: http://www.govaliants.tv/volleyball/volleyball161029B/index.html
All-Time Series (Since 2000):  NJCU leads, 6-2 / Manhattanville leads, 1-0
Last Result:  NJCU won 3-0, / 2010 – Manhattanville won 3-0
Players to Watch (CSI):  Victoria Wong will continue defending the back line as she has done all season long and while doing so has collected a career high in digs.  Vanessa Reyes and Skenderjie Mila will lead the attack for the Dolphins as they both have 100+ kills on the year.
Players to Watch (NJCU):  Ayleen Pittar collected 9 kills against the Dolphins in the meeting earlier this season and she will look to have a repeat performance. Shaylah Ware was cerebral when serving in the last meeting and tallied six aces while tallying 28 assists.
Players to Watch (MC): Spearheading the attack for the Valiants will be Asia Reid and Kerry Mackey.  Reid comes into today’s match as the kill leader on her team with 238 while Mackey is close behind with 233. Adrianna Alves comes in with 322 digs on the year, which leads the team.
News and Notes: The Dolphins have now found themselves on a three-match losing skid and will hope they can turn it around before the start of the CUNYAC Playoffs.  The Valiants come into today’s match, winners of three of their last five matches.  Today’s tri-match will be the final tune-up for the Valiants before their conference tournament.  When taking on CUNYAC opponents this season Manhattanville is 1-1, defeating John Jay, 3-0 but falling to Hunter 0-3.  For the Gothic Knights, today’s tri-match will conclude their season as they did not qualify for the NJAC tournament so look for the Knights to try and finish out the season on a three-match win streak.