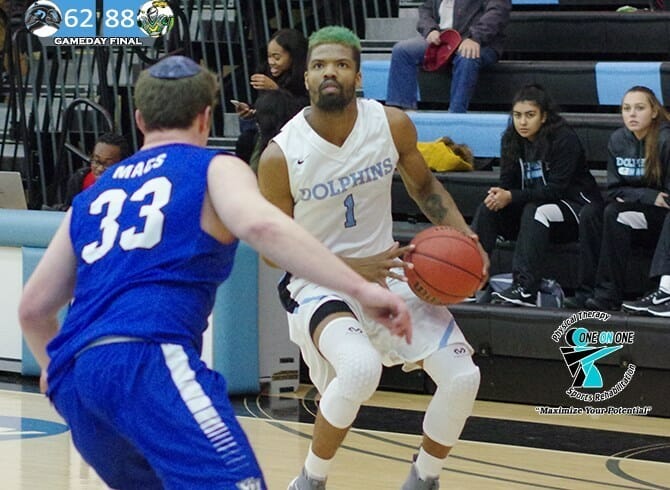 The College of Staten Island men’s basketball team dropped to 1-3 on the year after a 88-62 loss to New Jersey City University in the Battle of the Bayonne Bridge. CSI is now 0-3 on the road this season while the Gothic Knights improved to 4-1 overall this year.

CSI was edged out 39-32 in rebounds while also committing more turnovers (26-17).  Senior forward Khaleeq Baum finished second on the team with 12 points but shot a perfect 6-6 from the floor. Frank Schettino led the scoring with 14 points and two assists. Freshman Jade Spencer came off of the bench in a reserve role and led the team in rebounding with six while pouring in seven points.

The Dolphins fell behind early in the contest and were never able to regain the lead after their 1-0 lead in the beginning of the game.  CSI trailed 23-9 as the Dolphins seemed to have no answer for the Gothic Knights’ offense.  Staten Island was able to chip away at the lead as the first half went on.  The Dolphins finished the half on a 7-0 run after the halftime buzzer interrupted the momentum swing.

NJCU dominated in the second half going off for 53-points.  CSI was able to keep it close early and the beginning of the second half but a series of mini runs by the Gothic Knights kept the game out of reach for the Dolphins.  The struggles from three-point range for the Dolphins was the difference in the this game as they shot just 2-14 while the Gothic Knights shot 10-24.  CSI nearly made a comeback half way through the second half when Vaughndras Lennon hit a shot to make it 40-50.  That 10-point deficit was the closest the Dolphins would come to reclaiming the lead.

CSI will return to action on Tuesday, November 29 at 7:30 at the CSI Sports & Recreation Center in their first CUNYAC action of the season against John Jay College.