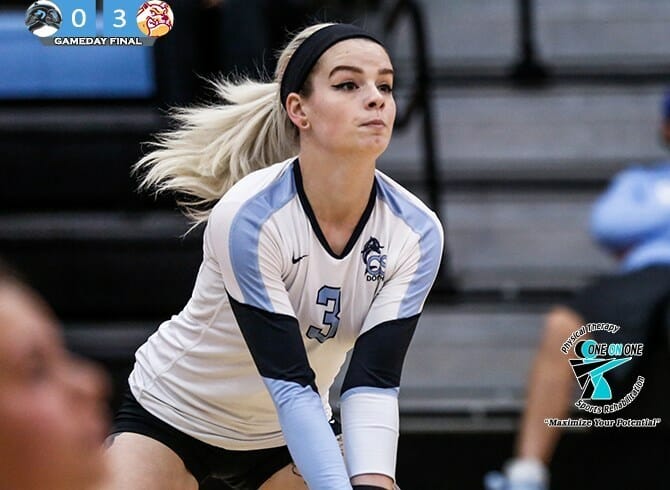 In a match where the Dolphins held leads late in the second and third sets respectively, the College of Staten Island women’s volleyball squad could not close things out, falling to Brooklyn College in the quarterfinal round of the 2016 CUNYAC Postseason Volleyball Tournament by a 3-0 score at the West Quad Center in Brooklyn, NY.  The Bulldogs will move on to semifinal play on Friday and advanced to 9-21 overall this season, while the Dolphins finalize their campaign at 7-20.  Final set scores were 25-20, 27-25, and 25-22.

The Dolphins grabbed a more modest, 4-0, lead in the opening set thanks to kills by Skenderjie Mila and Jessica Cafiero, but it proved to be short lived, as a pair of Sarina Rozek aces started an 11-2 run by the host Bulldogs that gave the home team control.  Christiola Butler added a kill to the mix as well.  Brooklyn kept their foot on the gas with another 6-3 spurt that opened up a 17-9 lead.  CSI battled back and a 4-0 run got them to within 21-16, and later a Siobhan Granich and Vanessa Reyes kill got CSI to within 24-20, but the hole was too wide to crawl out of as CSI fell, 25-20.

CSI did not let the first set get them down and like the opening stanza they shot right out to a great start in set number two.  A kill by Caitlin Esposito and a kill and ace from Reyes gave CSI a 6-0 edge, forcing a BC timeout.  The Bulldogs steadied the ship, but CSI still held control of the lead until late in the contest.  Up only one, 16-15, Esposito fired in two aces, helped by a Granich kill to make it 20-15, and CSI was looking good.

It would turn, however, on a Butler kill for Brooklyn, and after r=trading points and committing an error CSI asked for a timeout up only two, 23-21.  Rozek registered a kill but then mishandled an attack putting CSI on top, 24-22.  CSI had their chance but Esposito errored on an attack and then Jailene Paredes fired in two aces to give BC the lead, 25-24.  CSI tied it on a Granich kill, but BC’s Francesca LoCascio returned the favor twice, scoring back-to-back kills to give game two to the home squad, 27-25.

In the third set, it was Brooklyn’s turn to be the aggressor early, jumping out to a 4-1 lead before CSI started to chip away.  The result was an 8-2 run by the Dolphins, helped along by two Granich kills to make it 9-6.  Again, BC rallied back, and took a 16-13 lead on a Butler kill, but CSI responded with a 4-0 spurt to grab the lead again, 17-16, thanks to three-straight BC attack miscues.  Another swap of the lead ensued until CSI took a solid 22-19 lead after a BC timeout.  Again, however, CSI could not get over the hump.  Brianna Montana registered a kill, and after a CSI error, LoCascio posted back-to-back kills again to give BC the 23-22 lead.  Helen Lau then fired in a kill from the back line and a Reyes attack error ended the match 25-22 in BC’s favor, as they scored the final six points of the frame.

Granich led all CSI players with 12 kills on 45 attempts, chiming in with 12 digs as well.  Esposito tallied four aces, while Victoria Wong registered a team-high 16 digs.  Butler notched 12 kills for BC, while Rozek added four aces.  Crystal Wu led all with 18 defensive digs.

The Dolphins ended the season on a six-game skid, their longest of the year, and fell for the seventh straight time in CUNYAC quarterfinal round play.  Brooklyn advanced to the semifinals for the first time since 2013.  They will play top-seeded Hunter College at 4pm on Friday at Baruch as part of Semifinal round play.