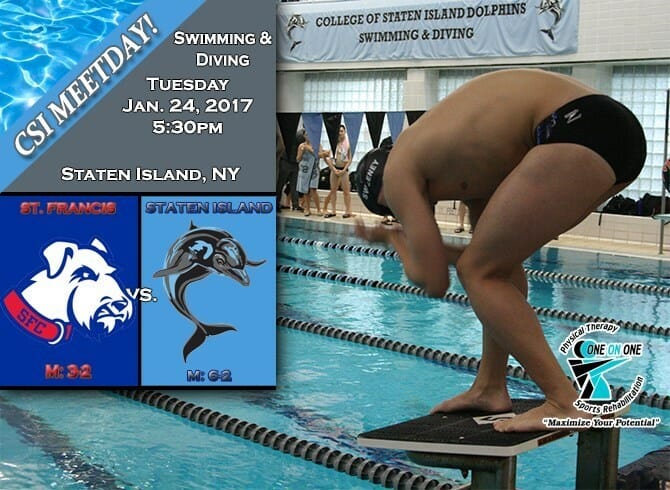 The CSI Dolphins men squad will look to protect their undefeated home record tonight against the Terriers from St. Francis Brooklyn.  The Dolphins suffered just their second loss of the season last Thursday to knock them down to 6-2 overall.

CSI VS. ST. FRANCIS BROOKLYN AT-A-GLANCE
Matchup: CSI Men (6-2) vs. St. Francis Brooklyn Men (3-2)
Where: Sports & Recreation Center – 2800 Victory Blvd, Staten Island, NY
Meet Time: 5:30pm
Live Video: www.csidolphins.com/csisportsnet
Swimmers to Watch (CSI): Tim Sweeney has been named CUNYAC Swimmer of the Week six times this season and will put his skills on display tonight in his home pool.  Sweeney most recently recorded a time of 21.98 in the 50 Free against Adelphi University last Thursday.  Omar Zaky has been a nice addition to the Dolphins this season and has earned several CUNYAC Rookie of the Week nods.  Zaky is coming off of a second place finish in the 100 back just last week and will look to give the Dolphins the same production in tonight’s meet.
Swimmers to Watch (SFB): Noah Thompson is the fastest swimmer for the Terrier’s and posted his best times of the season during the ECAC Winter Championship last month.  Thompson has two of the fastest times this season 21.32 in the 50 Free and 47.57 in the 100 Free.  Evan August is the leader in the 200 Free for St. Francis with a time of 1:45.87.
News and Notes: This will be the second meeting ever between these two squads. The last meeting came on January 23, 2014 where the Terriers were able to defeat the Dolphins 103-74.  The men are undefeated at home this season and will hope to keep it that way after tonight’s meet.  This will also be the first meeting between these two teams at the CSI Sports & Recreation Center in the school’s history. Tonight’s meet will be the final meet before their last CUNYAC meet of the season.  CSI will use the meet tonight to prepare for the CUNYAC Championships on February 3 where they will look to win their fourth straight CUNYAC title.