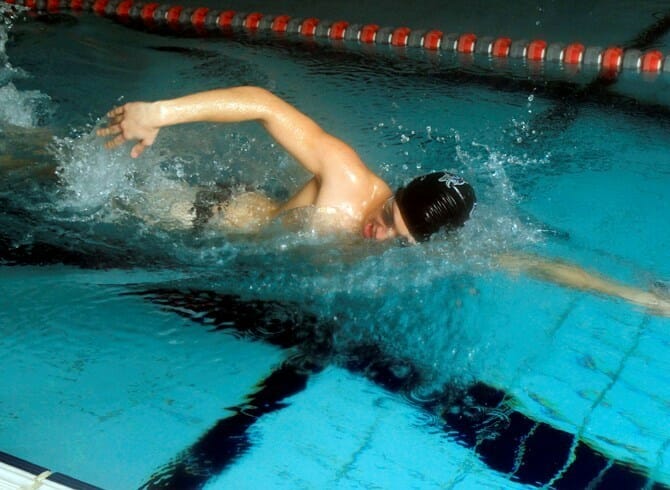 With the City University of New York Athletic Conference Championship now two-thirds of the way through, the College of Staten Island men’s team now sits firmly ahead in first place, earning a 46.5 point cushion, while the women have earned 260 points, putting them in third behind Hunter College and Baruch College.  The Championship Meet will conclude with six events tomorrow morning at Lehman College.

The action got started this morning at Lehman similarly to Friday, as diving took center stage.  There, the Dolphins men pulled forward with Adil el Haddad taking first place with a score of 187, followed by his brother Ayman El Haddad right behind to gain silver with a score or 163.15 points.  From there, the men kept pace with the rest of the CUNYAC field.  In the 200-yard Medley Relay the Dolphins took first again with a strong run by Omar Zaky, Brandon Lei, Tim Sweeney and Derek Villa, beating the Baruch foursome by less than half of a second.

After that came individual events, and CSI nearly swept the proceedings, taking gold in four out of the five races.  First, Omar Zaky secured a second-place finish in the 400-yard Individual Medley with a run of 5:01.24, over half of a minute better than his seed time.  Christopher Pinto also earned points with a fifth-place finish there, While Adil El Haddad placed 10th.  Then came Timothy Sweeny in the 100-yard Butterfly and he would dazzle, blowing away the field with a run of 49.53, good for a new CUNYAC record while achieving NCAA B-cut time.  Michael Munoz scored a fifth place finish, while Christopher Sorenson capped a seventh-place run.

The next CSI duo to shine would be Nicholas Defonte and Derek Villa, who came in first and second in the 200-yard Freestyle.  Less than a tenth of a second came between them. Next came the 100-yard Breaststroke, and this time it was Jonathan Gorinshteyn who blazed in at 1:02.25, beating Baruch’s Jonathan Hla by just four-tenths of a second to get the gold.  Brandon Lei placed fifth in the event, while Roberto Hidalgo placed seventh.  In the final individual event, the 100-yard Backstroke, Sweeney scored again, winning the event by over eight full seconds with a time of 51.27, missing the CUNYAC record by less than a second.  Omar Zaky earned a bronze medal in the event, while Pinto took fifth.

To wrap up the afternoon, CSI ran away with a first-place finish in the 800-yard Freestyle Relay, as the team of Defonte, Lei, Gorinshteyn and Villa took it with a time of 7:39.13, almost a half a minute before Baruch touched the wall.

Over on the women’s end the Dolphins scored three gold medals today, two silvers and a bronze, making for a very successful run in Day Two.  It started with the second gold of the meet for freshman diver Nouran Abualam, who took the 1M gold with a score of 164, almost 25 points better than the rest of the field.  CSI then followed with a silver finish in the 200-yard Medley Relay, as the quartet of Samantha Escobedo, Alicia Defonte, Victoria Crea, and Ewa Wojciechowska finished at 1:59.43, just missing first place Hunter College by 0.28 seconds.

Next came individual events and CSI started with a fourth place showing from Crea in the 100-yard Butterfly.  Then, the Dolphins scored their second gold medal of the meet, when Wojciechowska flew in with a time of 2:03.17 in the 200-yard Freestyle, winning it by over five and a half seconds.  Naomi Gaggi would finish fifth in the running.  After breaststroke competition, the Dolphins then scored a gold and a silver in the 100-yard Backstroke.  Samantha Escobedo took the win with a time of 1:06.68, beating her teammate Defonte by just 0.26 seconds.

To wrap up the day, the Dolphins scored a solid third-place finish in the 800-yard Freestyle Relay as the team of Olivia Brown, Jamilia Mambetalieva, Defonte, and Gaggi turned in a 9:43.80 performance, right behind Baruch and Hunter.