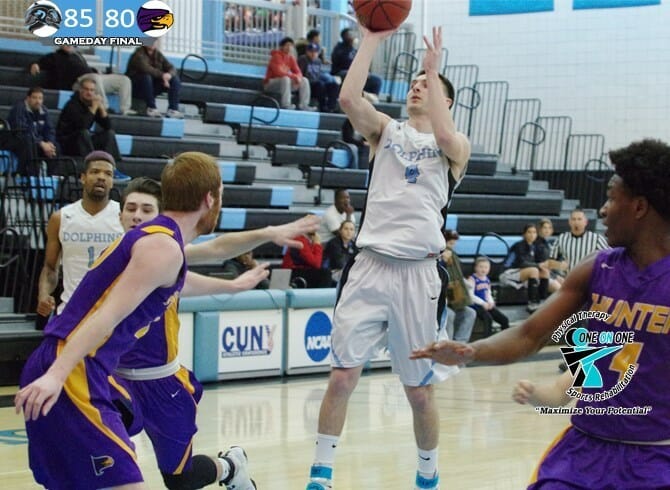 The College of Staten Island men’s basketball team continued rolling this afternoon with yet another CUNYAC victory over the Hawks of Hunter College. The men used a 48-point second half to stay perfect in the CUNYAC at 14-0 while dropping the Hawks to 6-7 in the conference.  CSI won this afternoon’s game by a small margin, 85-80.

Frank Schettino and Kevon Murphy teamed up to pour in 48 of the Dolphins’ 85 points this afternoon. Schettino nearly had yet another triple-double but came up one assist shy as his stat line was 25 points, 11 rebounds, and 9 assists. Murphy was effective inside and tallied 23 points and a game-high 15 rebounds.  Khaleeq Baum added 14 points and six rebounds while Edin Bracic added 10 points, six of which came from behind the arc.

The Dolphins struggled to find their groove in the first half of the contest this afternoon as the Hawks deployed a game plan which seemed to work during the first half.  The Hawks’ defensive pressure was relentless and doubled and pressed the entire first half which disrupted the Dolphins’ offense.  CSI did have some success inside in the first half, outscoring the Hawks 26-20 inside the paint.  Staten Island stayed with their offense despite Hunters game plan and they were able to find kinks in the scheme which led to 10 fast break points.

Staten Island trailed the whole first half as they shot just 38% from the floor while the Hawks shot 53%. The Dolphins never trailed big as Schettino and Murphy made sure they stayed within a manageable amount of points.  Jade Spencer was inserted into the game today and played outstanding defense against Matt Franks from Hunter College.  As the half began to come to a close both teams were matching what the other was doing as the deficit changed from three points to five almost every other play.

The second half was much better for the Dolphins as Head Coach Tony Petosa formulated a game plan to counteract the game plan that was being instituted by the Hawks. The men took the second lead of the game in the early portion of the second half when Murphy grabbed his own rebound and put it back in to put the Dolphins up 41-40.  Baum extended that lead when Bracic found him down low for yet another layup to put CSI up three, 43-40. The Hawks, however, would come right down the floor and sink a three-point basket to tie the game up for the second time.

Schettino would catch fire and hit three straight shots to put the Dolphins up six as he was able to pick apart the defense and find gaps to shoot from.  That streak would not last long as the Dolphins would go cold and allow the Hawks to take the lead and extend it to six points.  Danny Fusco nailed a jumper to put Hunter up five with 11 minutes remaining in the game. Trailing by just one with eight minutes to go, Christian Taylor would head to the foul line where he would make one of two to give the game its third tie.

The Hawks led until there was four minutes left in the contest, but it was Schettino who tied it up with a pair from the charity stripe.  Bracic was found by Schettino in the corner for a three-point basket which increased the Dolphins’ lead to 74-71.  Once Bracic sank the basket the Dolphins never surrendered the lead for the remaining four minutes. Hunter was able to keep it close but was never able to tie the game up as the Dolphins were able to convert from the line to secure their 14th-straight CUNYAC win.

The Dolphins will return to action on February 10, where they will play host to Lehman College on senior night at 7:30 pm!