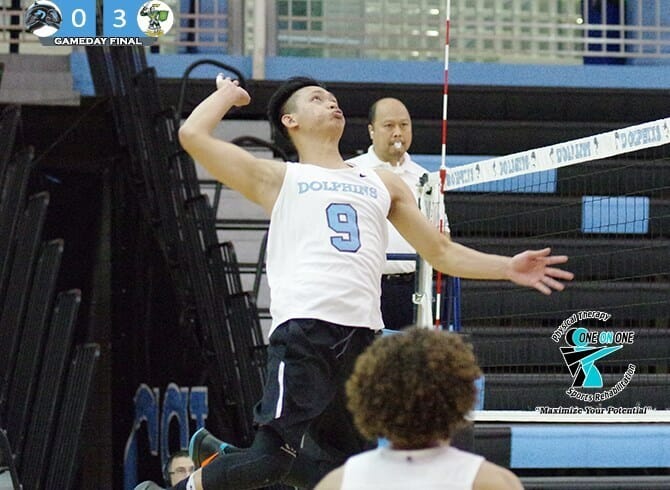 The College of Staten Island men’s volleyball team dropped their second straight match tonight at the CSI Sports & Recreation Center at the hands of the Gothic Knights from New Jersey City University.  The Gothic Knights improved to 3-0 all-time against the Dolphins with the 3-0 sweep of the Dolphins.  Staten Island dropped to 0-2 on the year while NJCU improved their mark to 2-5 overall.

The meeting tonight was the third all-time between these Bayonne Bridge neighbors, and for the third straight time, it was the New Jersey side coming away with the win.  The Gothic Knights used their momentum from their win over CCNY to help lift them past the Dolphins here tonight.  The Dolphins were coming off of a tough loss to now #15 Lasell College, two weeks ago.  CSI started the first and second sets off strong, holding an early lead before their stamina fizzled out which allowed the Gothic Knights to find their way back into each set.

The men stepped on their home court for the second time in as many games, looking to protect it from the invading Gothic Knights.  The Dolphins jumped out to a 7-4 lead, much to the delight of their home fans, over the Gothic Knights.  Staten Island, however, was unable to seal the deal as the Gothic Knights would find their rhythm and go on a 10-0 run to give them a 21-16 lead after trailing 16-11.  That duration caused Head Coach Jason Madsen to use both his timeouts to try and slow down the red hot offense.  The latter of the two timeouts was effective as the Dolphins started to find their way back into the set when they trailed 20-23 but were unable to complete the comeback as a pair of errors led to the Dolphins’ demise in the first set.  Mark Palencia was the majority of the offense for the Dolphins in this set, tallying five kills on 14 attacks.  Danil Kukovitskiy and Brandon Lei teamed up to secure a block each while Zebin Guo dug a set-high three digs.

With a game under their belt the Dolphins recuperated on the sidelines and got ready for the second set against the Gothic Knights.  Unfortunately the Gothic Knights’ hot offense carried over to the second set which continue to give the Dolphins issues defensively.  Early on in the set Anthony Vigilante was able to fool the back line of NJCU’s defense and secure an ace to give his team a 5-4 lead. The Gothic Knights would not go quietly however as NJCU would once again go on a run, this time it was six unanswered which would keep the Dolphins at bay for the remainder of the set. Vigilante tried to get his team going again when he once again pinpointed the soft spot while serving but his team was unable to capitalize on the momentum switch.

In the third set the Dolphins beat themselves as they tallied just seven kills on 25 attacks with eight errors in the final set of the night. Adil El Haddad had the Dolphins’ offense firing on all cylinders in the early goings of the final set. El Haddad started the set off with a kill followed by two serves which resulted in attacking errors by the Gothic Knights.  CSI battled hard all throughout this set and were able to knot it up at 10 after falling behind 9-8.  NJCU would go on a 6-0 to extend their lead over the Dolphins to 16-10.  The Dolphins, having used most of their energy in the first two sets, couldn’t muster enough energy to fight back into the final set in which they would fall 25-15.