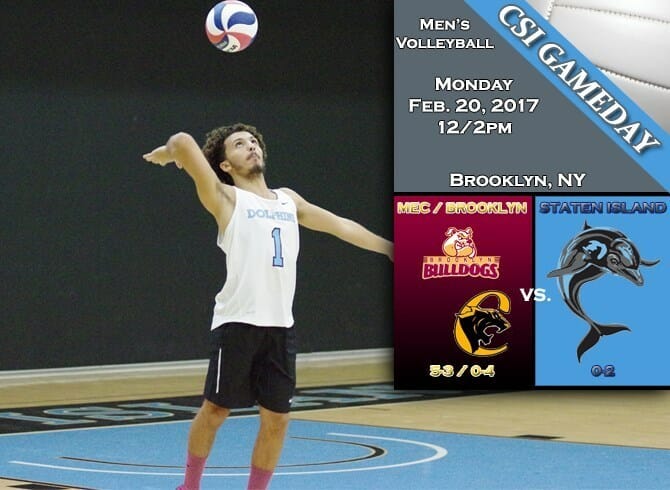 The Dolphins will look to bounce back from their two-game losing streak against Lasell College and NJ City University. Staten Island’s first CUNY match-up and tri-match of the season, where the Dolphins seek to even out their record and have a clean start in CUNY play.

CSI vs MEDGAR EVERS AND BROOKLYN COLLEGE AT-A-GLANCE
Matchup: CSI (0-2 Overall, 0-0 CUNYAC) vs. Medgar Evers College (0-4 overall, 0-1 CUNYAC) and Brooklyn College (5-3 Overall, 0-0 CUNYAC)
Where: West Quad Center, Brooklyn, NY
First serve: 12:00 pm
All-Time Series: CSI leads 5-0 against Medgar Evers and 3-1 against Brooklyn College
Players To Watch (CSI): Mark Palencia, is ranked first in the nation in attacks averaging 10.5 attacks per set. In two games Palencia has 21 kills, 12 of which were against NJ City University. Danil Kukovitskiy has a total of eight kills and six blocks on the year. Anthony Vigilante, new comer to the Staten Island squad, has four kills and three aces. The Dolphins will rely on Zebin Guo, team high of 15 digs, and Ronald Tisbe who is second on the team with 14 digs.
Players To Watch (MEC): Losing their top player, Jamal Chance, who finished a season with 334 kills and 183 digs, Medgar Evers will look to Shaquille Miller, 152 kills and 155 digs last season, to give the Cougars a lift from the senior absence. Angel Seda led the team with 454 assists in the 2016 season. Kareem Cyrus and Cecil Clarke also played a dominant defensive role, which Cyrus had 132 digs and Clarke notched 108 digs.
Players To Watch (BC): Ahmed Moawad leads the Bulldogs with 48 kills. Rudy Zhao (47 kills) and Vaughn Titus (46 kills) play a key factor in the Bulldogs offense. Snigdho Hassan is first on the team with 36 digs and Zhao is second with 30 digs.
News & Notes: The Dolphins lead in All-Time Series and are undefeated on their home court against both, Cougars and Bulldogs. The Bulldogs have an early season edge as they are already eight games into the season, compared to the Dolphins and Cougars. Staten Island will utilize Kubovitskiy, who is ranked 9th in the nation in blocks with .96 blocks per set, and Guo, ranked 27th in the nation averaging 2.5 digs per game.