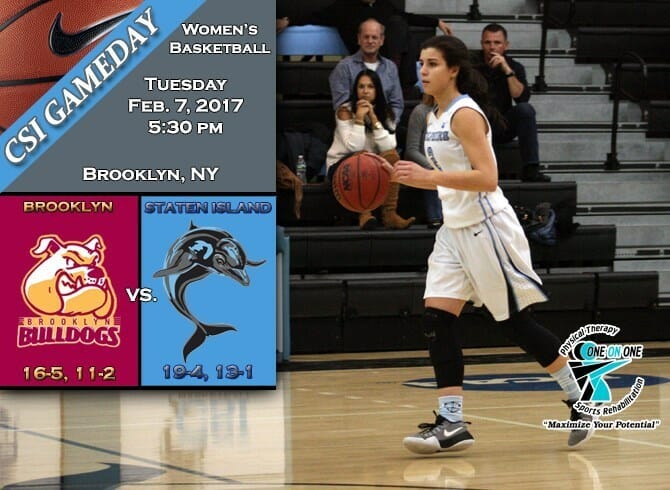 The College of Staten Island women’s basketball squad looks to complete a regular season sweep over Brooklyn College for the first time since the 2013-14 season.  The Dolphins will travel to Brooklyn, NY to take on the Bulldogs in a game that has playoff seeding implications.

CSI vs BROOKLYN COLLEGE AT-A-GLANCE
Matchup: Staten Island (19-4 overall, 13-1 CUNYAC) vs. Brooklyn College (16-5 Overall, 11-2 CUNYAC)
Where: West Quad Center – 2900 Bedford Ave. – Brooklyn, NY
Tip-Off:  5:30 pm
Live Video:  http://www.bctvcenter.org/watch/
All-Time Series: CSI leads 34-17
Last Meeting: January 14, 2017 – CSI won 72-56
Players To Watch (CSI):  Samantha Flecker will head into tonight’s game coming off of an outstanding double-double performance against the Hawks from Hunter College.  Flecker poured in 18 points and 16 rebounds in the narrow win over the Hawks.  Victoria Crea also had a solid performance for the Dolphins, turning in a 14 point, seven assist night.  Christina Pasaturo once again eclipsed the 20-point mark for the 18th straight time this season. Pasaturo had her second highest scoring output of the season in their last meeting this season with 30 points.
Players To Watch (BC):  Taylor Gallagher is coming off of a 16-point outing in a four-point win over Baruch College.  Twanda Holder was the only player to score double digits against the Dolphins earlier in the year, however she ranks sixth on the team with 6.1 points per game.  The Bulldogs’ leading scorer, Olivia Colbert was held to just 9 points and seven rebounds, both of which are below her season average.
News & Notes: The Dolphins outrebounded the Bulldogs 47-43 in their last outing enroute to a 72-56 win.  Staten Island continues rolling and has won 11-straight, 9 of which were against CUNYAC opponents.  As of tonight’s game the women currently hold the number one seed with two games remaining in the regular season.  CSI takes on Brooklyn tonight and Lehman on Friday, the two teams behind them, and a win will secure a top two finish while a pair of losses with knock the Dolphins out of the top two. The last meeting between the two teams, the Dolphins held the Bulldogs to 17 first half points and forcing 17 turnovers for the game. Pasaturo had 20 of her 30 points in the first half, shooting 6-8 from three-point range.  Flecker had 14 points and a game-high 9 rebounds. The Dolphins are looking to extend their 11-game winning streak. Staten Island’s offense is ranked 25th in the nation and 18th in the nation with 24.5 forced turnovers per game.