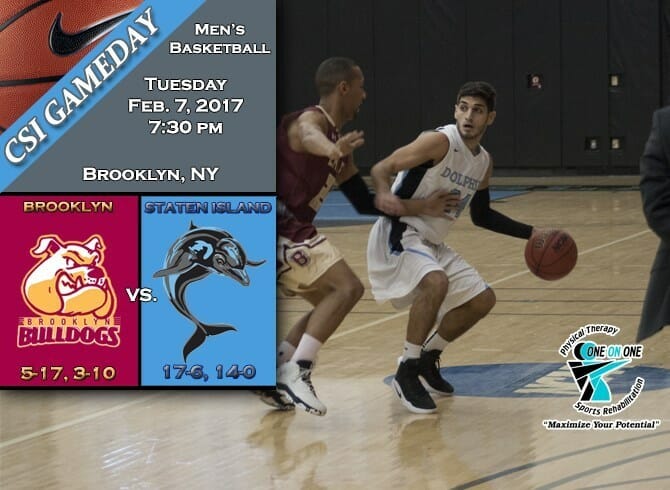 CSI vs BROOKLYN COLLEGE AT-A-GLANCE
Matchup: CSI (17-6 overall, 14-0 CUNYAC) vs. Brooklyn College (5-17 Overall, 3-10 CUNYAC)
Where: West Quad Center – Brooklyn, NY
Tip-Off:  7:30 pm
Live Video: http://www.bctvcenter.org/watch/
All-Time Series: CSI leads 39-16
Last Meeting: January 14, 2017 – CSI won 83-72
Players To Watch (CSI): Frank Schettino came up short for his third triple double tallying in 25 points, 11 rebounds, and 9 assists against Hunter. Schettino is first on the team with a solid 18 points per game and 9.1 assists per game. Kevon Murphy was second with 23 points, averaging 13.2 points per game. Murphy and Schettino are tied for second with 7 rebounds per game.
Players To Watch (BC): Brooklyn had their five starters finish with double digit points. Niv Konfino notched a game-game 33 points, 10 rebounds, and 7 assists in a big win against Baruch College. Enees Nikovic was second with 17 points and 7 rebounds. Maynard Grant IV poured 14 points, Chris Mcllhatton had 13 points, and Austin Wood had 12.
News & Notes: The men have been unstoppable this CUNYAC season, as they remain undefeated with two games left to play in the regular season. In the last meeting between the Dolphins and Bulldogs, Schettino had a double-double performance with 17 points and 15 assists. Edin Bracic had 16 points shooting 67% from the floor and 57% from behind the arc. The Bulldogs fought back to tie the game led by Mclllhatton’s 29-point performance. The Dolphins will have to be on top of their game as they seek to extend their 11 game win streak.