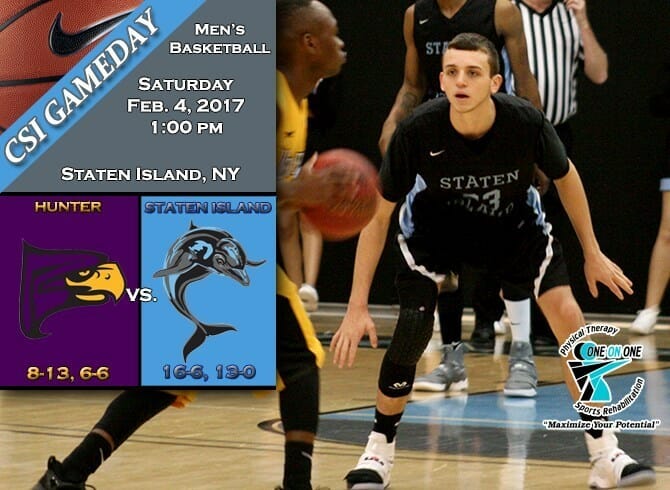 The College of Staten Island men’s basketball team will kick off the day as part of a CUNYAC doubleheader against the Hawks of Hunter College at the CSI Sports & Recreation Center this afternoon.  The men went flawless in January and are currently on a 10 game win streak and will look to keep that going this afternoon.

CSI vs HUNTER COLLEGE AT-A-GLANCE
Matchup: CSI (18-6 overall, 13-0 CUNYAC) vs. Hunter College (8-13 Overall, 6-6 CUNYAC)
Where: CSI Sports & Recreation Center – 2800 Victory Blvd. – Staten Island, NY
Tip-Off:  1:00 pm
Live Stats: http://www.sidearmstats.com/csi/mbball/
Live Video:  http://www.csidolphins.com/csisportsnet
All-Time Series: CSI leads 48-24
Last Meeting: January 11, 2017 – CSI won 95-87
Players To Watch (CSI): Frank Schettino tallied a game high 13 assists against Medgar Evers, Tuesday, where Kevon Murphy converted to points as he led the way with 15 points. Schettino sits second in the nation with 9.1 assists per game. Khaleeq Baum is second on the team averaging 13.5 points per game and first with 7.7 rebounds per game.
Players To Watch (HUNTER):  Amer Lukac paces the way for the Hawks averaging 15.4 points per game and 8.1 rebounds per game. Matt Franks is second on the team with 13.4 points per game.
News & Notes: The last home meeting between the Hawks and the Dolphins in 2016, the Hawks toppled Staten Island on a buzzer beater, 82-81. The Dolphins will seek for redemption and to keep their clean CUNYAC record. This season’s first meeting, the Dolphins had three players to finish on or above 20 points, Baum (26 points), Schettino (23 points), and Murphy (20 points). Schettino was one rebound shy of a triple-double with 9 rebounds and 10 assists.