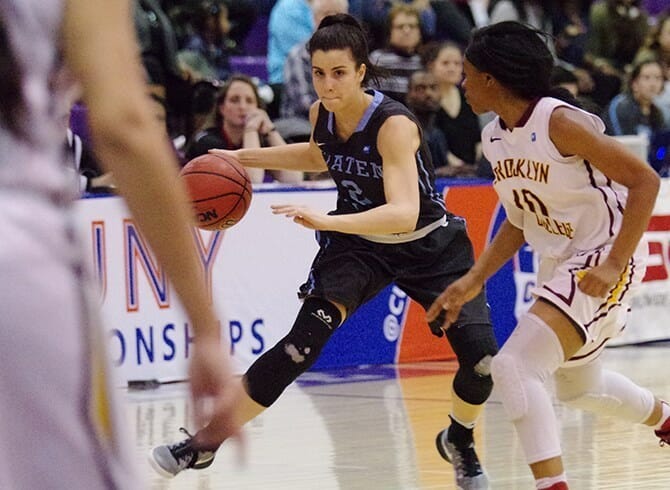 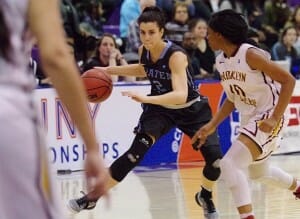 POSTGAME INTERVIEWS – The College of Staten Island women’s basketball team got up early, then weathered a frantic Brooklyn College surge to secure a 53-42 win over the top seeds at the Nat Holman Gymnasium in New York.  It was the Dolphins’ first CUNYAC Championship since 2005 and their seventh overall.  The 22-6 Dolphins will now await word on an NCAA Division III National Championship Tournament berth, announced on Monday.

Both teams struggled to find the bottom of the net in the opening stanza of tonight’s game.  Angelique Price, however, did not have trouble finding the net as she shot 50% from the floor and paced all scorers with eight points through 10 minutes of play.  The nationally ranked defense of the Dolphins showed up in the first quarter and forced seven turnovers with three of them resulting in steals. The Dolphins were able to use their fast paced offense to weather the Bulldogs and the tired legs led to sloppy play by Brooklyn.  BC starting point guard Karen Mak found herself in foul trouble early and had to sit out for a majority of the first half, tempering the Bulldogs attack.

[youtube]http://www.youtube.com/watch?v=R5vzF3txB1Q[/youtube]Staten Island was able to hit their deep shots on a neutral court with relative ease whereas the Bulldogs struggled and went 0-4 from the line. Over the last three games, all of which were playoff games, the Dolphins held opponents to an average of 21 points at the half.  Tonight was no different as they held the top-seeded Bulldogs to 18 at the half.  Aiding in the solid defensive stand was Rosa Perone, who was able to keep Olivia Colbert and  Maya Agee-Thomas in check while staying out of foul trouble.  While the Dolphins were having success from behind the arc, they had their issues from the charity stripe as they went 0-4 from the line.  The Dolphins were really able to jump out to their lead after Victoria Crea and Flecker sunk three’s to cushion their lead.

The Dolphins came out of the locker room after the half and picked up right where they left off in the first half.  CUNYAC Player of the Year Christina Pasaturo drained a three to extend the Dolphins’ lead to 11 which caused Brooklyn to call a quick timeout to try and regroup and slow down the surging Dolphins. The Bulldogs were able to get Mak back on the court but the Dolphins had full momentum of the game and were really settling into the flow of Championship game.  After coming out of timeout called by Brooklyn, Crea was able to slice through the lane and dish a pass out to Flecker who sank a corner three to give the Dolphins their largest lead of the night.

With the momentum on their side the Bulldogs chunked away at the Dolphins lead.  Brooklyn was able to come all the way from down 18 to down just four points with 6:38 remaining.  The Dolphins were stuck on an iceberg as they were scoreless for 9 minutes before Pasaturo was able to break their drought with a tough layup.  With that basket, Pasaturo broke the single season scoring record (608) that was held by Courtney Aimetti in 2000-01.  Up just four with 5:34 remaining, Crea found herself wide open from behind the arc and converted it to add to the Dolphins lead and put them up seven.

At 4:42 the Dolphins lost their big defender Perone when she was called for a fouled, knocking her out of the game. Jacquelyn Cali, who was also in foul trouble, subbed in for Perone.  Both teams would go scoreless for a four minute stretch as both teams struggled to convert any of their shots.  The Dolphins, holding the lead, with just over a minute remaining decided to use up all 30 seconds wisely before taking their shot. That was a tactic that would work nicely for the Dolphins as they Bulldogs were forced to foul and send the Dolphins to the line.  After missing all of their free throws for 90% of the game, the Dolphins finally found their rhythm and finished with seven made free throws on the night.

After the Dolphins converted their free throws the Bulldogs came storming down the court and chucked up three’s only to have the rebounds fall into the Dolphins’ hands where they were able to hold the ball until the clock hit zero.

The win is the Dolphins’ first CUNYAC title since 2005 in a bout that saw the Dolphins and Bulldogs square off for the first time in the championship game.  Christina Pasaturo (16 points, 5 rebounds, 2 assists) was named CUNYAC Finals MVP while Angelique Price (14 points, 9 rebounds)was named to the CUNYAC All-Tournament Team.  Samantha Flecker (11 points, 11 rebounds) collected another double-double in the win.  Victoria Crea was an essential part to the Dolphins and collected 10 points, 8 rebounds, and 2 assists.

The Dolphins will now await until Monday to see who they will face in the NCAA Division III Regional Round.