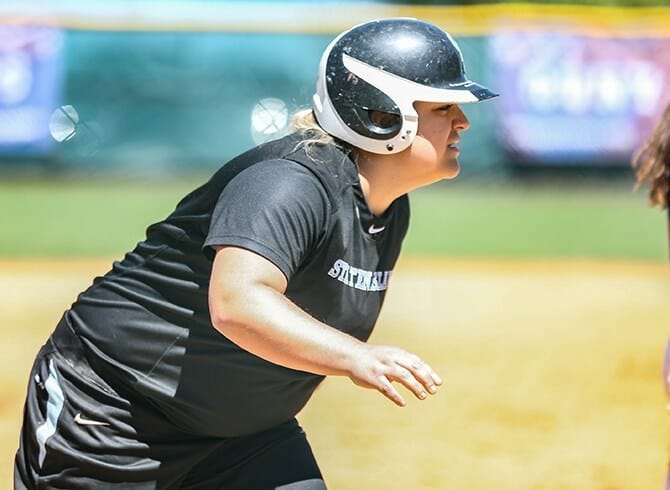 After a 5-3 rip through Florida that ended this weekend, the College of Staten Island softball team got more positive news today, as they swept the City University of New York Athletic Conference’s weekly award allotment.  Vanessa Jioia took home Player of the Week honors, while Patricia Riches snagged Rookie of the Week and Jacqueline Cautela Pitcher of the Week, respectively.

Jioia picked up right where she left off a year ago.  As a second year junior, she ripped off a .435 average at the dish this past week, scattering 10 hits in 23 at-bats, hitting safely in six of the eight games played.  She also led the team with seven RBI, lacing a pair of doubles to go with five walks, raising her on-base percentage to .536.  The Dolphins are 3-0 this season when Jioia nets an RBI in a game.

Perhaps no one had a better week in Florida outright than Riches, who led all Dolphins with a blistering .600 batting average, .720 slugging percentage and a .655 on-base percentage.  Riches was 15-25 at the dish, spreading three doubles, four RBI and five runs scored throughout the week.  she was also walked four times, right behind Jioia for tops on the squad.  Riches also boasted a .967 fielding percentage, committing a lone error in 30 chances.

Three-time CUNYAC Tournament MVP Cautela went right back to work to start her senior season.  Cautela went 3-0 in Florida with a microscopic 0.29 ERA.  She surrendered a lone earned run in her first outing, then proceeded to throw 18 scoreless innings, which included a pair of extra-inning contests.  For the week she registered 11 strikeouts against four walks.

The Dolphins will get back to action, weather-permitting, this weekend when they face off against Purchase College and Montclair State University at the CSI Softball Complex.