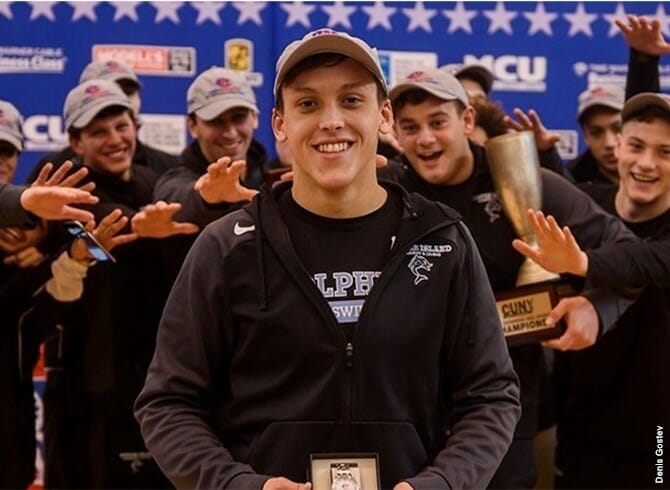 Tim Sweeney has been named the CUNYAC/Hospital for Special Surgery Scholar Athlete of the Month for February 2017. The senior from Staten Island, NY has accumulated a 3.86 GPA while majoring in Math and minoring in both Finance and Geography. Sweeney had an outstanding month of February for the Dolphins. He began the month at the CUNYAC Swimming and Diving Championships earning his third CUNYAC Championship MVP in a row, after scoring 48 individual points throughout the weekend, and earning six gold medals. In the process, Sweeney broke two more individual records in the 100 & 200 yard butterfly at this year’s meet, giving the senior six career CUNYAC Championship records.

The St. Peter’s alum has swam nearly his whole life. When choosing a school, he found that the College of Staten Island was the best fit for him. “I was looking at a few different schools coming out of high school,” said Sweeney. “In the end, CSI was the best fit for me academically and being accepted into the MaCaulay honors program helped as well. At CSI I knew I was getting a great education.” “Obviously swimming had a big factor too. I was actually familiar with Coach Ackalitis before I went to CSI as he was an assistant coach on one of my club teams, so that made me even more comfortable.”

The senior’s schedule is a busy one, “I don’t have too much free time. Most of my life revolves around the campus of CSI, I spend more time here than anywhere else,” says Sweeney, half-jokingly. “We practice every day from 7-9 AM and we’ll have two-a-days, two times a week. Outside of practice we hit the gym three times a week,” said Sweeney about his work for swimming. On the academic side, “I go to class and I often meet up with fellow students to study and work on things together. In addition, I am involved with a research program here on campus. I work with some professors in the math department as well as professors in the finance and geography departments.” The MaCaulay program requires an honors thesis and this research program is Sweeney’s way of working on his thesis. On top of all of the dedication that goes into being a student-athlete, Sweeney also works at the CSI Aquatics Center as a lifeguard and provides swimming lessons.

How does he do it? “I’ve been swimming since childhood, and I’ve always managed to keep school and swimming parallel to each other, I rely on both of them to keep the other in line,” says Sweeney, “having a set schedule keeps me focused, I know I need to have practice in the morning, and then I have a set time for homework, a set time for class, so it offers a little more structure and organization in my day.” “When it comes to both, I strive to be better than I was, whether it’s getting a better time or improving my GPA. I always try to be a little better than I was the day before, and when that happens, then the rest falls into place if that does happen.”

As for the future, “I’ve been applying to grad school for actuarial science, which combines the field of math and finance together,” says Sweeney, “I want to become an actuary, which is somebody who forecasts risk and probabilities, for either an insurance company or to work with investing.” This February, Sweeney, a two-time CUNYAC Performer of the Year, capped off a legendary career for the Dolphins at the CUNYAC Championships. “I consider myself lucky to be a member of the CUNYAC, I was able to have a lot of good races there. However, I do owe a lot of my success to my teammates because more than half of my gold medals were from being on relay teams. I wouldn’t have all of my success without my current and past teammates, they’ve all had a hand in that success.” When asked how he’s been able to have such an outstanding career at CSI and within the CUNYAC, Sweeney said, “I swam for a long time before coming to CSI so I built on what I did in my previous years. Each year I increased the amount of yardage in my workouts. I looked back each year on my previous season and what I could do to improve more. Each year, the team and I tried to add to what we didn’t do the year before.” In addition, Sweeney finished February at the Metro Swimming Championships where he finished third overall in the 200 yard Butterfly and where his 400 yard Freestyle Relay team finished 9th overall. As a result of his great weekend, he was given the Co-Outstanding Senior Award, making him the first Dolphin swimmer to ever take home that honor.

After discovering he had been named the CUNYAC Scholar Athlete of the Month for the second time during his career, Sweeney said the following, “It’s the perfect ending to a career, as I just finished swimming my last meet this past weekend. Coach Ackalitis told me I won the award and I was so happy. It’s almost the perfect cap to my swimming career that I’ve been working hard at for the last 17 years. I’m very appreciative of everything CSI and the conference has done for me these past four years.” Sweeney ends his career for the Dolphins owning the following school records: