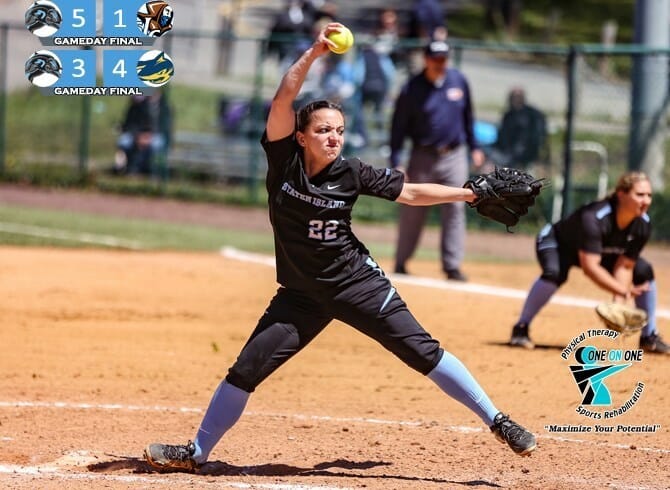 The College of Staten Island softball team started their 2017 campaign today in Orlando, FL at the ESPN Sports Complex. The Dolphins played in a pair of games with the first coming against St. Joseph’s College – Maine which they won 5-1 followed by a 3-4 loss to Simmons College. The Dolphins rounded out the day 1-1 but showed great promise.

Patricia Riches was outstanding in her collegiate debut. Riches batted .857 over the pair of games, going 6-for-7 with a walk while nabbing a double in the process. Ashley Notaro also had an impressive outing, hitting .571 and going 4-for-7 with a double.

The Dolphins wasted no time finding runs early in this contest against the Monks. Senior Jacquelyn Cautela got things going with a lead off single through the left side. Sophomore Antoinette Galbo would move Cautela over to second base when she grounded out to the second baseman. Kristen Meagher would not leave Cautela stranded on as she would reach on a fielders choice which allow Cautela to cross home plate for the first run of the game and the Dolphins’ season.

Freshman standout Patricia Riches reached on walk and would eventually be brought home by junior Nicolette Trapani who singled to center field to increase the Dolphins lead to two over the Monks. Staten Island would cool off for an inning before jumping out to a 4-0 lead after Cautela hit a solo home run over the left field wall for her first home run of the season. Riches would slug a one-out single up the middle for her first career hit as a Dolphin. The women would then capitalize on a a miscue by the Monks outfielder who dropped a fly ball and allowed Riches to cross home plate to put the Dolphins up 4-0.

The Monks would settle into the game and hold the Dolphins scoreless for two innings before the Dolphins were able to find their bats once again and drive in a run to take a 5-0 lead. The Monks would find their way onto the board when Melodie Bailey hit an RBI double to give the Monks their lone run of the game.

CSI protected the plate well in their first real action of the season and only accumulated one strikeout throughout their first game. Vanessa Jioia and Riches both collected two hits in the game.

Cautela picked up her first win of the year with a six strikeout performance while only allowing five hits.

The Dolphins were back in action immediately after taking down the Monks of St. Joseph’s College – Maine. Next on the docket for CSI were the Sharks of Simmons College.

The Sharks, much like the Dolphins in game one, found success early on and were able to take a 3-0 lead over the Dolphins, a spot they don’t find themselves in often. Trapani, who was in the circle for the second game, was able to settle in after the three run outburst and really begin to shutdown the Sharks.

With the Sharks offense slowed down the Dolphins were able to make up some ground and it all began in the fourth inning when Ashley Notaro hit a lead off double to left field. Advancing Notaro to third was Christina Ceverizzo who slipped one down the left field line for a single and put Notaro one base away from putting the Dolphins on the board. Trapani stepped to the plate and hit a knuckler to the second basemen who nearly made a double play, however, Trapani was able to beat the throw and allow Notaro to cross the plate.

The Dolphins would not stop there as Cautela doubled to left field which allowed Trapani to score. CSI would fall behind 4-2 in the top of the sixth but was able to earn that run back in the bottom of the sixth when Julianna Cretella crushed a deep single to right center, allowing Trapani to cross the dish. With just one out and Cretella on third the Dolphins got unlucky and hit into a double play which ended the inning.

CSI went out on the field and held the Monks scoreless in the top of the seventh and nearly made a late game comeback. With the tying run, Riches, on third Notaro stepped to the plated and ripped a liner to the right fielder who had to made a nice grab to keep the Dolphins from tying the game up and give them their second win of the season.

Trapani starts her season 0-1 but struck out three batters and forced 10 fly outs.

The Dolphins will return to the ESPN Sports Complex tomorrow afternoon where they will take on Emerson at 1:15 and Thiel at 5:45.