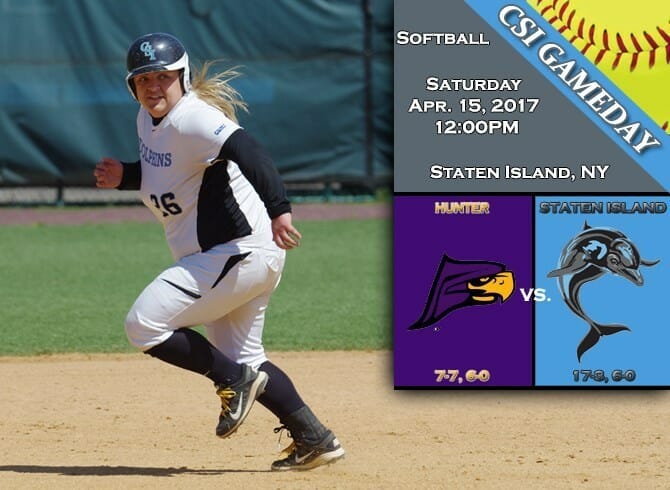 The College of Staten Island softball team will defend their home diamond this afternoon against CUNYAC rivals Hunter College. The Dolphins and Hawks have split games during the regular season the past two seasons and the Dolphins will look to put an end to that this season with a sweep this afternoon at the CSI Softball Complex.

CSI vs HUNTER COLLEGE AT-A-GLANCE
Matchup: CSI (17-3 overall 6-0 CUNYAC) vs. Hunter College (7-7 overall, 6-0 CUNYAC)
Where: CSI Softball Complex -2800 Victory Blvd – Staten Island, NY
First Pitch: 12:00 pm
All-Time Series:  CSI leads 49-34
Players To Watch (CSI): Jacqueline Cautela continues to prove that she is a force to be reckoned with.  Yesterday she improved her pitching record to 8-0 while lowering her nation lead ERA down to 0.13 from 0.15.  Cautela also helps her own cause as she is second on the squad with a .422 batting average.  Patricia Riches has been an unstoppable force at the plate all season and is third in the nation with a .550 batting average.  Riches leads the team in RBIs, home runs and doubles while also boasting a monstrous .817 slugging percentage.
Players To Watch (HC): Samantha Molloy sits first on her team with a .448 batting average, two doubles and one homerun. Stefanie Abolt and Taylor Crofts a tied for first on the team with 13 runs. Abolt is first on the team with 12 RBI. Freshman Caroline Bibula is third with a .395 ERA with 11 runs and one double. Bibula is also in the top three from the pitching circle as she is first with a 3.16 ERA with a 2-1 record in 31.0 IP. Bibula has a team-high of 19 strikeouts with 10 walks.
News & Notes: Both teams are undefeated this season at 6-0. The last meeting between the Dolphins and Hawks was in CUNYAC Championship, where the Dolphins toppled the Hawks in both games, 2-0 and 8-0, to win the title for the fourth year in a row. Both CUNY opponents are close in batting average, where Staten Island is atop with .357 average and Hunter .311 average. Hunter is ranked 13th in the nation with a scoring average of 7.30 runs per game. However, the Dolphin’s pitching staff could cause trouble for the Hawks as they have a 0.91 ERA in 116.0 IP, putting the Dolphins in the top-five nationally ranked in Earned Runs Average.