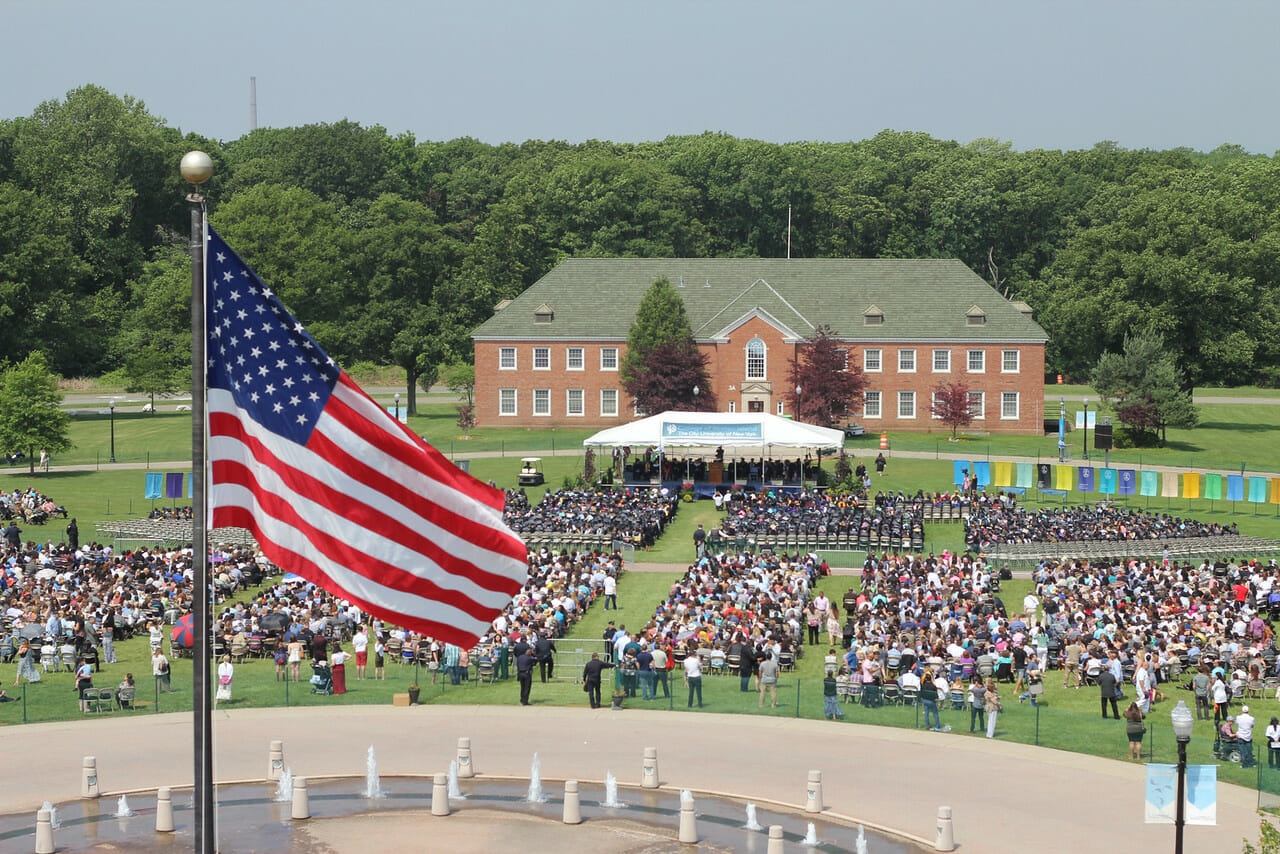 Gray skies and cool temperatures could not quell the enthusiasm among the graduating Class of 2017, and their mentors, families, and friends as they all gathered on the Great Lawn of the College of Staten Island for the institution’s 68th Commencement. This year marked the largest graduating class in the school’s 60-year history with 2,994 January and June grads, and 297 August 2017 candidates.

After introductory remarks from CSI Provost and Senior Vice President for Academic Affairs Gary Reichard, PhD, CSI President William J. Fritz, PhD, spoke about the College’s legacy of mission. Using comments from the first Commencement at Staten Island Community College in 1958 from then SICC President Walter Willig; Staten Island Borough President Albert V. Maniscalco; and College founder Arleigh B. Williamson, Dr. Fritz underscored the continuity of mission that has been an integral part of CSI from the beginning, “the opportunity to raise oneself through academic excellence; the opportunity to lift community; and the opportunity to advance society; in sum, the opportunity to ascend. From an initial student body of 111 to 14,000 today—our mission remains the same.”

Following remarks from CUNY Trustees Rita DiMartino and Jill O’Donnell-Tormey, as well as CUNY Vice Chancellor and University CIO Brian Cohen, Associate Professor of Philosophy Barbara Montero, PhD, offered words of encouragement to the graduates on behalf of the faculty. Dr. Montero used her comments to discuss the importance of neural plasticity, the brain’s natural ability to form new neural connections, thus strengthening and regenerating, as a way of encouraging the grads to continue in their intellectual pursuits to improve their brains throughout their lives. “Increasing your brain power doesn’t have to stop at graduation. It’s more than simply living up to your potential; you can, in a very good sense of the word, increase your potential. But it takes work,” she said.

This year’s valedictorian, Palwasha Syar, a Macaulay Honors College student, who received a Bachelor of Science degree in Biochemistry, spoke on behalf of the Class of 2017. After discussing the move from her native Pakistan to the U.S. when she was 12 and the often difficult transition that she had to make to life in the U.S., Syar offered stories of others who overcame adversity and challenges to get a CSI degree. She stated, “Our campus is full of diverse and tough students who went through many obstacles to sit here today and graduate. These challenges, on top of the stress from taking finals and pulling all-nighters to complete that 15-page paper, show that you are strong and that you are committed. It means that all of you today have perseverance and the tenacity to follow through with your goals.” Syar also offered some advice to her fellow grads to not be afraid of obstacles and failures, and to celebrate the people around them.

Also during the ceremony, the College bestowed four honorary degrees: Deirdre DeAngelis, Principal of New Dorp High School, as well as publishers and College benefactors Peter and Robin Jovanovich, received the degree of Doctoral of Humane Letters; Margaret Ricciardi, ’86, who is still attending art classes at CSI at age 103, received a Doctor of Arts degree; and a Doctor of Science degree went to Dr. Andy Shih, the Senior Vice President for Public Health and Inclusion at Autism Speaks.