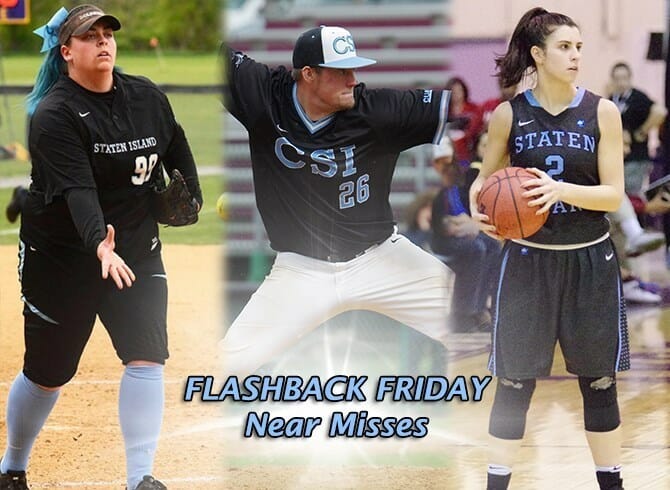 This summer, csidolphins.com will be once again unveiling its Flashback Friday feature to usher in the offseason and get us ready for the fall season come late-August.  College of Staten Island Athletics staffers voted on their Top 10 moments from the 2016-17 year.  Each Friday over the summer, we will unveil a new top moment, complete with photos, videos, player interviews and more to complete the collection.

Flashback Fridays will debut next Friday, June 23, right here on www.csidolphins.com and be sure to keep tabs on your favorite moments via Instagram and Facebook.  Of course, getting a grand list of top moments whittled down to just 10 is tough, so to get us started we’ve included a list of near misses below. May 12, 2017 – Williamstown, MA
After winning the CUNYAC Postseason Championship for the fifth-consecutive year, the softball team drew the No. 3 seed in the NCAA Division III National Championship Tournament’s Regional round, sending them to Williams College in Williamstown, Massachusetts.  Their opponents in the opening game was Rensselaer Polytechnic Institute.  The No. 2 seeded Engineers got on the board with a run in the second inning, but CSI responded with a thunderous third inning, scoring four runs, helped along by key singles from freshman Patricia Riches and senior Kristy Colangelo.  Together with two RPI errors, CSI was able to ride the inning to victory, helped along by the arm of Alison Meagher who went the distance in the complete-game win allowing just six hits while fanning three batters.  CSI would ultimately finish with a record of 35-9 in 2017, their best record in program history, capping a super season which saw them bring home their 18th conference title. February 24, 2017 – New York, NY
College of Staten Island junior women’s basketball star Christina Pasaturo sure chose the right time to eclipse a long-standing record.  On February 24 at the CUNYAC Women’s Basketball Championship played before a packed house at the City College of New York, Pasaturo and the Dolphins took on Brooklyn College for the rights to advance to the NCAA Tournament.  CSI hadn’t won a title in 12 years, but the team raced out to a big early lead and never looked back scoring a defensive 53-42 win over the Bulldogs.  Pasaturo led the way for the Dolphins, scoring 16 points, breaking the school’s single season scoring record in the process, previously held by Courtney Aimetti set back in 2000-01 at 608.  Pasaturo would add 18 more in a tournament loss the next week at Christopher Newport College, a game where she broke the school’s single season three-point scoring record with 109.  Her final tally for the season was 629 points, 21 more than the previous record.  Pasaturo ended her season as CUNYAC and ECAC Metro NY/NJ Player of the Year. April 11, 2017 – Staten Island, NY
In what was officially the longest game of the season, clocking in at four hours, CSI senior Bobby Drake legged out an infield hit to score the winning run in a 9-8, 12-inning thriller over visiting Ramapo College at the CSI Baseball Complex in mid-April.  CSI was down 7-3 in the seventh inning before scoring two in the seventh and another three in the eighth to take an 8-7 lead.  Ramapo responded back by scratching out a run in the 9th to make it 8-8.  Both teams let chances slide until the 12th inning.  There, with two outs, CSI got back-to-back hits to put runners on the corners.  Up next stepped Drake, who hit a lazy ground ball to second base, but the motoring outfielder was able to leg out the single, scoring Glenn Glennerster from third base to give CSI the thrilling win.  Drake was 0-6 at the dish before the at-bat but finished with two RBI.  CSI’s Chris Karnbach was also a hero, going the final 7.2 innings of relief to earn the win.