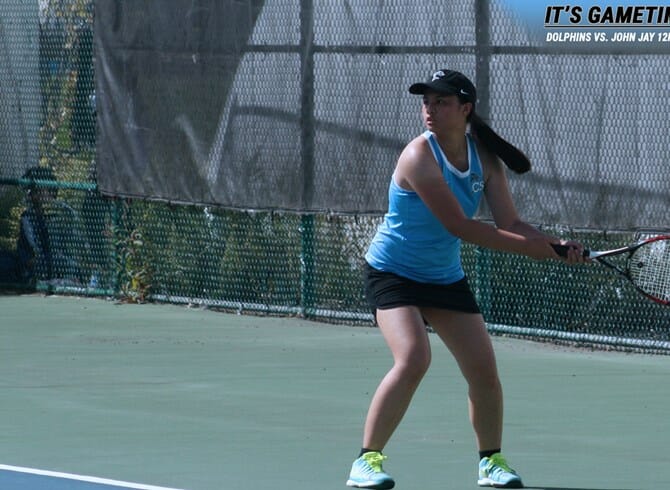 The College of Staten Island women’s tennis team is in action today when they host the Bloodhounds of John Jay College at the CSI Tennis Center for a CUNYAC contest at 12:00 pm.

CSI vs JOHN JAY COLLEGE
Matchup:  CSI (2-1, 2-0 CUNYAC) vs. JOHN JAY (2-0, 1-0 CUNYAC)
Where: 2800 Victory Blvd, Staten Island, NY 10314
All-Time Series: CSI leads 15-6
Last Meeting: October 4, 2016 – CSI won 5-4
Players to Watch (CSI): Tristiana Adragna will help lift the Dolphins from court one this afternoon as her Dolphins take on the Bloodhounds.  Adragna was outstanding for the Dolphins last season and will look to keep that going here this afternoon.  Samantha Maizer picked up a crucial win against Hunter to start the year to help lift them to a 6-3 win.
Players to Watch (JJC):  Bernarda Reyes is coming off of a nice win from court one against Western Conn.  She was able to defeat her opponents 6-4 in straight sets.  Rageene Berry needed an extra set on court two to pick up a win for her team.
News and Notes:  The Dolphins have won the last 9 matches against the Bloodhounds and will look to make it 10-straight this afternoon. Staten Island last lost to the Bloodhounds in 2007 in the CUNYAC Semifinal at the CSI Tennis Center. John Jay is off to their best start to a season since 2004 where they also started 2-0.