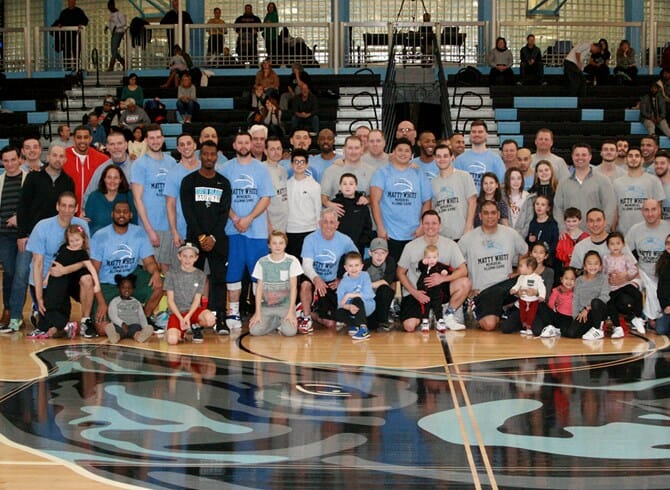 The 8th Annual Matty White Men’s Basketball Alumni Game took place at the Sports & Recreation Center this afternoon, with a record number in attendance there to salute long time head coach Tony Petosa.  Dedicated to long-time Assistant coach Matty White and his wife, Dolores White, the afternoon featured a tribute to Petosa before and after a rousing game that saw the Blue Alumni score a 77-74 victory over the Gray team.

A total of 30 players suited up and took the court with other watching from the stands and on the bench.  With members of the White family looking on, the Gray team stormed out to an early lead before the boys in blue staged their comeback.  The score was knotted at 74-74 at the end of regulation so a sudden-death overtime period ensued, and a well-contested three-pointer by Dale Taranto was the dagger that sealed the game (clip below).

Before that, Petosa was introduced as the guest of honor for the game, donning No. 50 on the Blue team.  After intros, it was the Gray unit that raced to a 21-7 lead, led by two Mark Fiorello three’s and a couple more by Ryan Hennessey and Brian Namorato. Two lay-ups by Javon Cox fueled the Blue team and narrowed the game to 23-15 by the end of the first quarter.

In the second stanza, the Gray unit motored up by 10 points on three occasions before a Kevin Swanberg three made it 36-25 with 4:34 to go in the half.  Blue again responded nicely, ending on a 9-3 run fueled by three straight Kurtis Manesy baskets and a three from Michael Pan, cutting the lead to 39-35 at the half.

A 12-3 run to start the second half for Blue turned the tables and Christian Montervino nailed a pair to give Blue a 47-42 edge.  Gray powered back to take the lead but after a late tie, Blue ended the third frame on a 10-5 run to take a 59-54 lead into the fourth.  Blue seemed to be sitting comfortably, up by a 74-66 margin with 4:33 to play, but this time Gray worked up another run, ending the game on an 8-0 spurt, with Swanberg pumping in two three’s to end the game at 74-74.

A new jump ball was staged with the winners scoring first.  Gray won the tap but missed three-straight shots, the final one a layup by Jordan Young from in-close.  that gave the ball to the Blue team and after a great deal of passing the ball came to Taranto who had an open window and nailed the three, giving Blue the win in walk-off fashion.

At the conclusion of the contest, Alumni gathered for a full luncheon at the concourse of the arena, and prior to the start of the CSI Men’s Basketball contest against York College, a full tribute to Petosa was on hand, one that featured a permanent banner put up in the gymnasium that highlights his CSI and CUNYAC record 459 career wins as a coach.