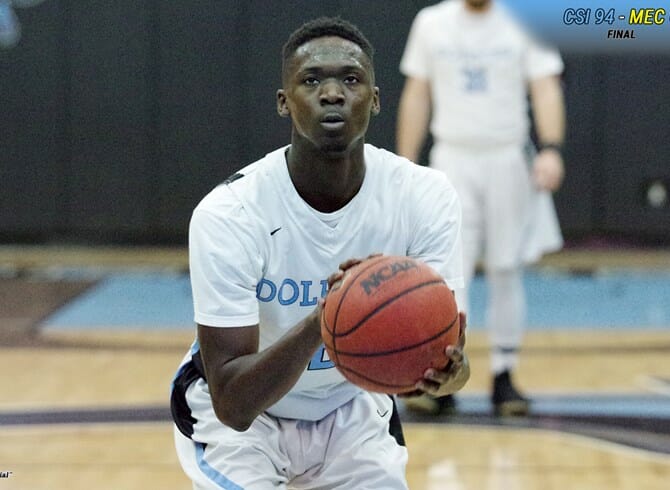 The College of Staten Island men’s basketball squad used a massive second half surge to buffer a modest halftime lead, racing by Medgar Evers College on the road in Brooklyn tonight, 94-63, as part of CUNYAC play.  The win was the Dolphins’ second-straight, improving the team to 6-7 overall and 5-1 in the CUNYAC, while the Cougars fell to 3-9, 1-4, respectively.

Despite the lop-sided final it was an even contest through the first 15+ minutes of the first half in this test, as the teams worked through six ties and five lead changes.  It was the home Cougars that skated out to an early edge, taking advantage of a tough shooting stretch for CSI to open up a 13-6 lead over eight minutes into the opening frame.

The Dolphins stayed involved, finally making their move with a little over five minutes to play in the opening stage.  Down 20-17, Jade Spencer converted on a three-point play to tie.  After a MEC three, CSI countered with a fast, 6-0, run, anchored by an Adeola Latunji lay-up and a Robert Rossiter put-back.  Another Rossiter jumper coupled with a Raymond Savage jumper extended CSI’s lead to a high of five, 32-27, before MEC forced a 32-28 game into the locker room.

The 15-minute intermission was exactly what the Dolphins needed, and the team stayed red-hot to open the second half.  Three-straight made three’s, the last by Savage, gave CSI a quick, 43-30, lead just two minutes into the second half, and from there, CSI would not relent.  The team shot 63.2% in the half, and was a healthy 6-10 from beyond the arc while forcing nine MEC turnovers.

Five minutes into the half, another Rossiter jumper gave CSI a 57-34 lead, and the Dolphins would ultimately match the lead with under 10 minutes to play.  A three-pointer for MEC, would make things interesting, cutting the lead to 78-62, with six minutes to play, but CSI responded by closing the game on a 16-1 run, holding MEC without a field goal in its last nine shots.

CSI was led by Latunji’s 25 points on 10-of-15 shooting from the field.  Rossiter finished with 14 points while Savage recorded his first career double-double, posting 11 points with 10 rebounds.  MEC was paced by Justin Sutton’s 16 points, while CUNYAC leading scorer Maurice Swaby was held to just seven markers on 3-17 shooting from the floor.  CSI finished shooting an even 50% while MEC struggled at 32%.

The Dolphins will return to action on Saturday, going on the road again, this time to face Hunter College at 3pm, continuing CUNYAC play.