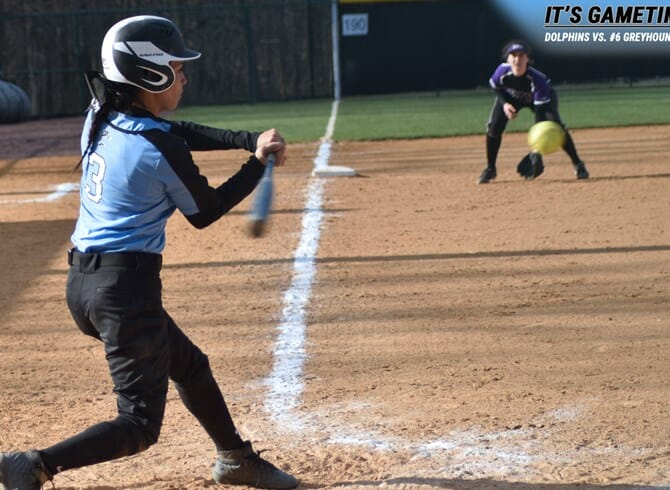 The College of Staten Island softball program will take on #6 Moravian College at the CSI Softball Complex this afternoon. The Greyhounds come in riding a 21-game win streak while the Dolphins will look to keep their strong home record, 7-1, alive.

CSI vs. #6 MORAVIAN COLLEGE
Matchup: College of Staten Island (12-8) vs. #6 Moravian College (23-3)
Where: CSI Softball Complex – 2800 Victory Blvd., Staten Island, NY
All-Time Series:  Moravian leads, 10-1
Last Meeting: April 22, 2017 – Split – Moravian won G1, 5-0 / CSI won G2, 3-1
Players to Watch (CSI): Patricia Riches is coming off of her finest doubleheader of the season in which she went 6-for-7 with three doubles and a pair of home runs against bitter CUNYAC rivals, Hunter College.  With that performance Riches jumped back to the top of the chart for the Dolphins, batting .443 on the year with 11 RBI. Last year against the Greyhounds, Riches went 1-for-1 with a run and walk in the 3-1 win. Gabriele DeLeon sits behind Riches with a .409 average and sits in second with 16 RBI. Alison Meagher was lights out last year against Moravian, pitching 7.0 innings and allowed just three hits with seven strikeouts.
Players to Watch (MC): Shannon Brogan leads the Greyhounds with a .438 batting average and has struck out just three times this year. Brooke Wehr has been dominant at the plate, collecting eight home runs and a team-high 29 RBI while batting .437. Kat Spilman has also been hot at the plate, batting .436 with five home runs and 28 RBI, making a dangerous one-two punch with Wehr. In the circle, Josie Novak has the teams best ERA at 1.58 and has struck out 78 batters.
News & Notes: This series began in 2011 and has been going strong ever since. The Greyhounds won the first 10 meetings but the Dolphins put a stop to that last year when they went to Bethlehem, PA and defeated the Greyhounds on their home field. Today the Dolphins will host the Greyhounds for the third time and will hope to pick up a home win against their nationally ranked opponents. As a team, the Greyhounds are hitting a healthy .361 with 20 home runs while the Dolphins come in hitting .287