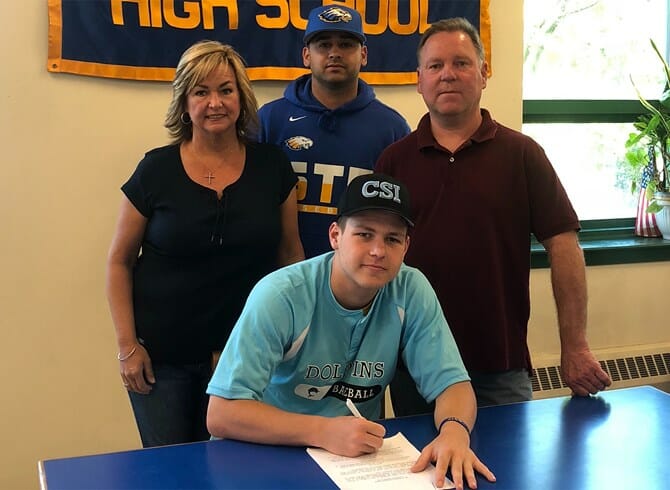 Staten Island, NY | Head Coach Michael Mauro and the College of Staten Island baseball program is proud to announce the celebratory signing of St. Peter’s High School senior Luke Smieya.  The catcher and outfielder is a varsity captain this season with the Eagles, and the coaching staff is anxious to get him involved in the Dolphins program in 2018-19.

A star for both the Junior Varsity and Varsity teams at St. Peter’s, Smieya was a captain for both units and is putting the finishing touches on his great career this season with the Eagles.  He is excited about playing for a quality team, close to home.

“I chose CSI because of what they offer academically and the short commute,” he said.  “I feel I can make an impact on the CSI program with the little things I do on and off the field.”

Smieya was also a member of the Staten Island Cadets baseball organization for three years, where he took home the 18U Bruce Windorf Award.  At St. Peter’s he plays for Head Coach Bobby Glennerster, a former Assistant Coach with CSI.  Head Coach Michael Mauro likes what he sees in his new recruit.

“We’ve watched Luke play several times, recommended by Bobby as being someone who could really help our program.  He is an excellent defensive catcher with a strong arm and I think he is going to really excel at the college level,” Mauro said.  “Very good catchers are hard to come by at our level so it makes you very happy when you are able to get one like Luke on your roster.  We are very happy he is going to develop in our program.”

The son of Edward and Jill Smieya, Luke has an older brother, Taylor.

The CSI Baseball program yielded an 18-16 record this past season, winning its fourth-straight CUNYAC title and their 20th overall.