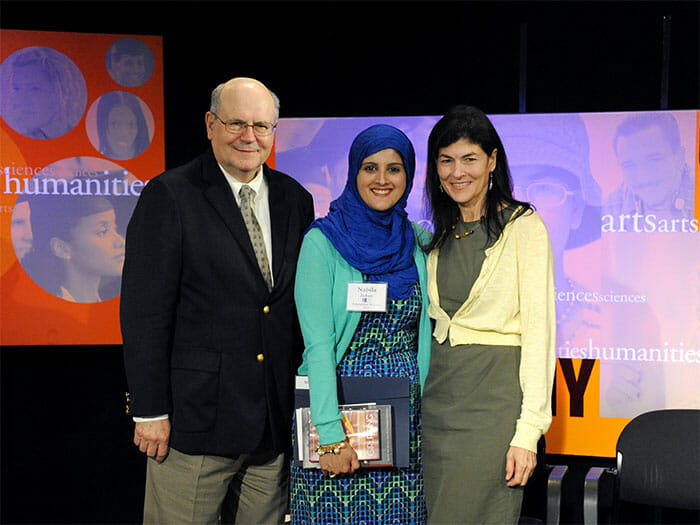 Nabila Zubair was awarded the 2015 Peter Jennings Scholarship Laurel Award at The Graduate Center of The City University of New York (CUNY).

The Peter Jennings Scholarship Laurel Award Program provides scholarships to adults who have recently completed their coursework with great success, achieved their High School Equivalency (HSE) diplomas through CUNY’s Adult Learning Centers (ALC), and who will continue their education at a CUNY College. The scholarships, in the amount of $1,000 each, were awarded to ten individuals at the June 18th event with the support of his widow Kayce Freed Jennings.

Growing up in Kuwait, Nabila Zubair, was a serious student in school and particularly did well in science and biology classes.  When Nabila married at 17 years old, her hopes for further education were no longer a possibility. In her culture, a married woman was required to put aside her hopes and concentrate her time and energy toward caring for her family.

“Nabila’s secret wish was to have the opportunity to go to college and continue studying topics in biology and science and become a nurse,” explains Donna Grant, Director of the ALC, English as a Second Language (ESOL) Programs, and CUNY Start at CSI.  “It is amazing to me that she has persevered through so many obstacles.”

Nabila was a young newlywed with an infant child when Iraq invaded Kuwait which resulted in the Persian Gulf War. There was aerial and naval bombardment of Kuwait to defeat the invading Iraqi army, but when the ground assault began, Nabila’s husband’s business was burned to the ground.

The family fled Kuwait, and for the next eight years the family was unsettled, living in three different countries.

With her four children and husband, she arrived in the United States in 1999, where Nabila’s first priority on her list of steps toward achieving a college degree was to improve her English language skills.

When she enrolled in the ALC in 2010, she was not quite at third grade reading level.  At the end of that semester, her assessment test score had moved her into a Pre-GED level class, demonstrating literacy skills at the middle school level.  After Nabila’s first semester at the ALC, family responsibilities again became the only priority, and her goal was put on hold again.  Then, in 2012, Super Storm Sandy devastated Nabila’s Staten Island neighborhood and her husband’s small business.  Postponing her studies for a time to rebuild her family business, Nabila eventually returned to the ALC, continued to make literacy gains, and took the high school equivalency (HSE) exam in the summer of 2014.  She successfully passed the HSE exam that summer, and Nabila transitioned to the CUNY Language Immersion Program (CLIP), where she is completing the advanced class.

“It is really our privilege to serve Nabila and the students of the ALC,” says Christopher Cruz Cullari, Executive Director of Continuing Education and Professional Development. “There are many students in our programs who share similar stories of success despite facing enormous obstacles, and I am deeply impressed with the commitment and resiliency of our students.”  Cullari was joined at the ceremony by College of Staten Island President Dr. William J. Fritz, along with the leadership team of Continuing Education and Professional Development, and Kenichi Iwama, Deputy to the President and Chief of Staff.

The Office of Continuing Education and Professional Development supervises programs in pre-college remediation such as CUNY Start, as well as programs for Workforce Development, Community Development, English for Speakers of Other Languages, and the 1199 Union Student Support Program for Working Adults.   Its services and transformative programs provide support to diverse groups of students throughout Staten Island and New York City. 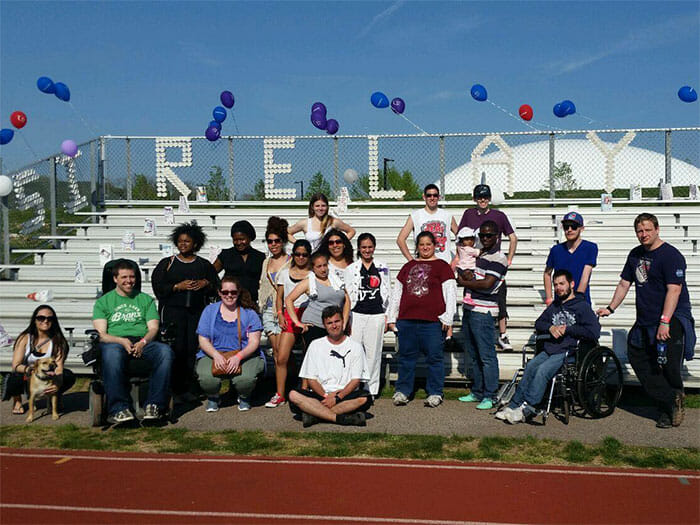 The Relay for Life at the College of Staten Island (CSI)  brings together students, faculty, and staff from different areas of the College to unite and work together toward a common goal: winning the fight against cancer.  Relay for Life this year raised more than $12,000 from 275 participants, raising the six year fundraising total to $100,000.

Students with the Melissa Riggio Higher Education Program, a fully inclusive college-based program designed to prepare people with intellectual and developmental disabilities for adult life, raised $2,731 this year, accounting for 31% of CSI’s total donations. The students exceeded their 2015 goal of $2,000 and nearly doubled their 2014 contribution of $1,400.

“Our students are always looking for different ways to give back to the Staten Island community through participating in various charitable causes and events,” Melissa Riggio Program Director Matthew Weiler proudly explained.

The Melissa Riggio Program is a part of the portfolio of Continuing Education and Professional Development. Executive Director, Christopher Cruz Cullari, explains how he continues to be impressed with the students. “Melissa Riggio students are contributing so much to the College. Through the program, the entire CSI community has an opportunity to learn what a fully inclusive environment can look like. It is a symbol of our institutional value of diversity in action.” Melissa Riggio students participate in a number of College-wide and community charitable events and have raised money or volunteered for animal shelters, Project Hospitality, Meals on Wheels, NY Cares, and domestic violence awareness.

The AHRC New York City’s Melissa Riggio Higher Education Program at the College of Staten Island was created in 2008. Through higher education coursework, and out of the classroom experiences such as career exploration and preparation, self-awareness and personal improvement, community involvement, and socialization, students participate in a comprehensive learning opportunity that fosters their full engagement with society. It is a three-year program that provides individualized academic, vocational, community and social experiences for young adults in a highly supportive, yet challenging, environment.

The annual Relay for Life is organized by the Office of Student Life, which is part of the Division for Student Affairs. All proceeds benefit the American Cancer Society. 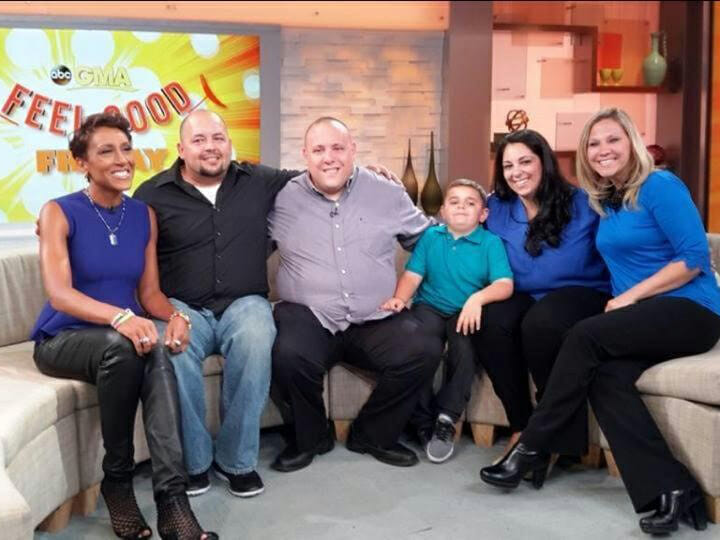 Most donor recipients do not usually get the chance to meet the strangers who saved their lives on national television, but that is just what Joseph Yannantuono did on Good Morning America, as he was introduced to Justin Jenkins, the man who donated his stem cells to save Yannantuono just 21 months earlier.

Yannantuono, who is a Continuing Education instructor at the College of Staten Island, was diagnosed in 2011 with Stage IV Lymphoma. In February of 2012, after several rounds of chemotherapy, his doctors told him that he was cancer free and he believed his life would begin to be normal again. Unfortunately, just six months later, the doctors broke the news that not only was the cancer back but he would need a stem cell transplant, and without that, it could be fatal. “I broke down,” said the outspoken Yannantuono. “I was scared, confused, you name it. I thought about my wife and my son and I said to myself, I can’t die on them.”

Years earlier, halfway across the country in Texas, Jenkins volunteered to get swabbed during a bone marrow drive at his work place for Be The Match, just for the free snacks, never thinking that donation would eventually be the beginning of saving a strangers life. Be The Match, operated by the National Marrow Donor Program, manages the largest and most diverse marrow registry in the world. Through Be The Match, Yannantuono was paired with Jenkins in a rare ten out of ten genetic match. Jenkins was then put through many tests and given many shots containing flu-like contagions to help boost his white blood cell count. Once high enough, they were then able to extract his marrow and take the stem cells from there. The cells were flown in a matter of hours to Memorial Sloan Kettering Cancer Center where they were transplanted into Yannantuono on December 7, 2012. On Christmas Eve 2012, after being in the hospital for 24 days, much less than the 100 days that most stem cell transplant patients stay in the hospital, he was able to go home and surprise his family. Although he felt weak and could barely walk up steps, he was excited to be able to spend Christmas with the people he loved the most.

Over the course of time, Yannantuono began to grow stronger and stronger, celebrating each little victory as it happened. Little things, like going out in public without wearing a mask and latex gloves to keep away the germs or beginning to go back to work, were reasons to celebrate. What he still really wanted was to be able to thank the mystery person who saved his life and to celebrate that. In these types of transplant situations, the donor and recipient must remain anonymous for at least one year after the transplant and then, if both parties are willing, information about each other can be shared. Yannantuono knew that he wanted to meet this person but didn’t know if the other person wanted contact. In spring 2014, not too long after celebrating his one-year “birthday” Yannantuono received a message on the phone, “Hi, my name is Justin and I think that you were the recipient of my cells.” In the next few months, they connected through social media and phone calls, never knowing if they would get to meet in person.

The story does not end there. Just days before Jenkins received Yannantuono’s contact information, Jenkin’s mother was killed in a tragic car accident. He was grief stricken, his mother was his rock, she had raised him on her own. He says that getting Yannantuono’s contact information and connecting with him helped to saved him as they begin to act as each other’s support system.

After months and months of speaking to each other, the Jenkins family as well as Yannantuono ‘s wife, Christine, contacted Be The Match to see if they offered some type of donor/recipient meeting program. Soon after, Jenkins got the call that Be The Match would generously fund his family’s trip to NYC so that they could participate in the Be The Match Walk/Run with Yannantuonos and his family and friends as well as the added bonus of getting to meet each other for the first time on Good Morning America.  On September 19th, on national television, they met for the first time. It’s something that no one will ever forget.

Since receiving a clean bill of health, Yannantuono has returned to teaching math for CSI’s Continuing Education program. Working closely with Be The Match and Chris Cruz-Culari, HEO Officer for Continuing Education and Professional Development, they hope to be able to start a bone marrow drive on the CSI campus in the hope of finding matches for all of the other people waiting for donors.

For more information about Be The Match, please visit bethematch.org.