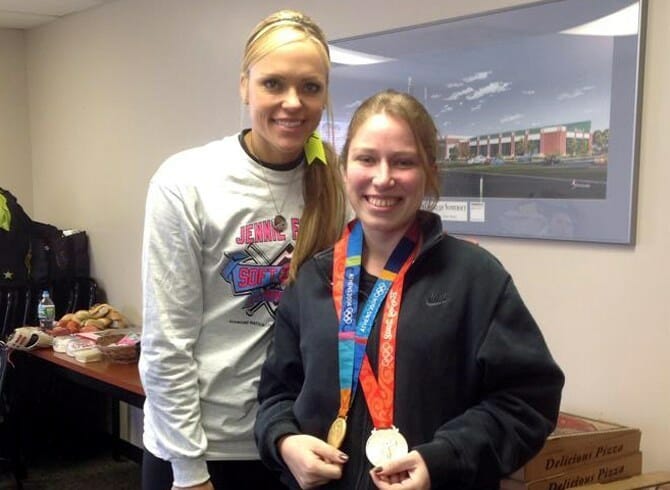 This past spring, the College of Staten Island conducted its “No One Stands Alone” benefit night for former athlete Danielle Ponsiglione.  This past weekend, United States Olympian and Gold Medalist softball pitcher Jennie Finch lent herself to the cause, meeting with Ponsiglione and many other youths as part of a benefit clinic in Raritan Township, New Jersey, organized by Ponsiglione’s former skipper and CSI Head Coach Stella Porto.

Finch, along with several other US Olympians met with several children, aged 8 to 18, as part of a two-day clinic at HealthQuest Dome in Flemington, NJ.  It was there that Porto organized and facilitated a meeting between Ponsiglione and her idol Finch.  The pitchers exchanged conversation and Ponsiglione was able to take in Finch’s gold medals.  Ponsiglione, CSI’s all-time winningest softball tosser, is battling Stage IV Melanoma, and mentioned to Porto that meeting Finch was at the top of her wish list.  Porto, who organized the benefit night last April for her former pupil at the CSI Baseball Complex, an event that took home nearly $8,000 for Ponsiglione and her family, has been working feverishly at making the meeting happen.

“Unfortunately, Jennie’s schedule kept her from being at the benefit night we had for Danielle this past spring,” said Porto.  “But true to form Jennie was excited to be a part of this event and to finally meet Danielle.  It was a very overwhelming experience for all of us.”

The softball clinic that took place was part of the sixth annual Finch Extravaganza at the HealthQuest Sports Dome, and over 240 youths took part in the prestigious event conducted by Olympians, covering hitting, fielding, pitching, throwing, base running and conditioning.