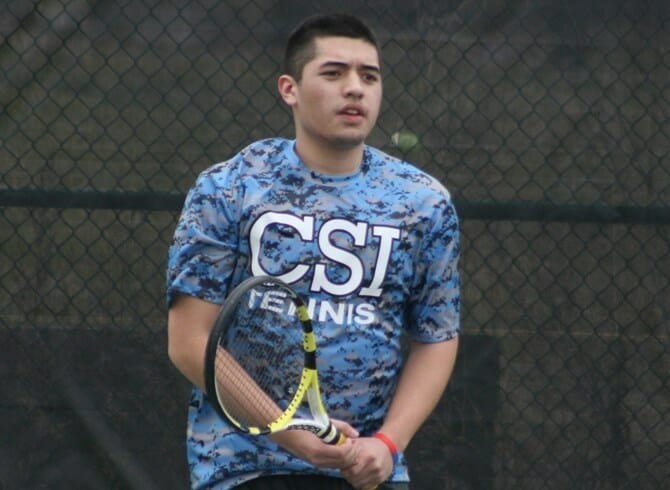 After a near two-week layoff, the College of Staten Island men’s tennis team got back into the swing of things on a very successful note, scoring a 9-0 win over York College as part of CUNYAC play in Queens this afternoon.  The Dolphins improved to 2-0 overall and within the CUNYAC, while York fell to 0-2, 0-1, respectively.  For CSI, it was their first match since March 17, as their previous two matches were washed away due to rain.

CSI got off to a flying start in doubles.  In the pole position, Ed Ruffe and Andrew Adia scored an 8-0 victory, while one flight over, Austin Kapetanakis teamed with Dmitriy Vituk to earn an 8-2 winner over York’s team of Kalsang Chhosphel and Justin Mo.  CSI’s first-year tandem of Nolan Reese and Chris Livoti then cleaned things up at No. 3, scoring an 8-1 win over YC’s Felix Liew and Rashawn Cream.

Up next for CSI is a non-conference test tomorrow against Farmingdale State College, slated for a 4:30pm start.