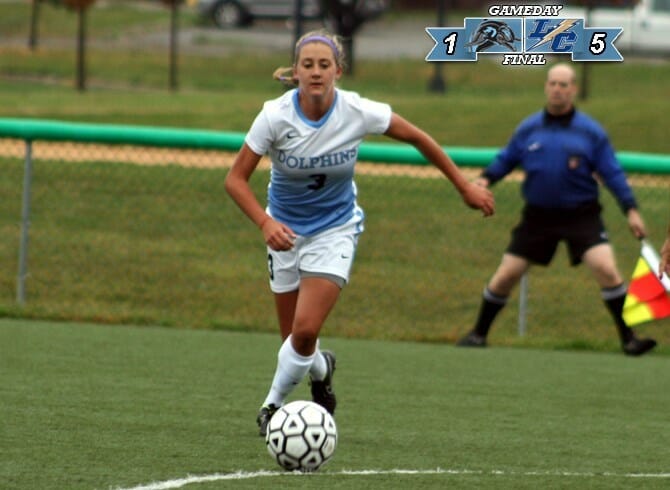 The College of Staten Island women’s soccer team saw their 25-game CUNYAC Regular Season unbeaten streak snapped this afternoon, falling hard to Lehman College in the Bronx, NY, by a 5-1 count. Lehman used a two-goal spurt in three minutes and then scored three minutes into the second half to expand their leads, never looking back. CSI fell to 5-2 overall and 1-1 in CUNYAC with the loss, while the Lightning lifted to 6-1, 2-1, respectively.

Despite the lop-sided final score, CSI actually started the game with the better of play, posting five of the game’s first six shots. But at 17:20, Lehman was able to register on a rebound right in front of the goal by Lillian Barreto that found a way passed CSI keeper Kristy Colangelo. With CSi seemingly still reeling, Lehman scored again exactly three minutes later, when a Gredia Sanchez rocket got over Colangelo, hit the crossbar and fell in for a 2-0 lead.

A determined CSI tried to claw back, and over the next 23 minutes CSI sent six of the game’s next seven shots towards net, but Stephanie Gonzalez made five big saves for the Lightning, and a shot by Danielle Smith that looked like a goal bounced harmlessly off of a crossbar. Still, CSI continued to push, and they finally were able to push through with 1:03 remaining in the half. Racing in towards goal, Danielle Alexandrini bounced one off of a charging Gonzalez and put it in the net for CSI making it 2-1 right before the half.

With CSI seizing momentum, the first few minutes of the second half were important for both teams and that’s when Lehman essentially took control. Three minutes in, on the first shot of the half, Barreto scored again, and it was again directly in front off of a rebound, giving Lehman a big, 3-1, lead.

Forced to attack to try and get even, CSI was met with frustration while LC played a strong counter-attacking system. That worked to the tune of two more goals, After CSI almost tied it with a Lauren Smith shot that hit off the crossbar, Pamela Sanchez made it 4-1 in the 68th minute. Six minutes later, CSI’s Jennifer Cosenza seemed primed for a goal, but her shot hit the post. Three minutes after that Chelsea Harris scored for LC, making it 5-1 in the 81st minute, and that was how the game would finalize.

The loss for CSI was their first as part of CUNYAC play since October 23, 2010, a 4-1 loss to Medgar Evers College. It was marks the first time Lehman has beaten CSI. The Dolphins had won the previous four meetings by a combined score of 18-1.

CSI will now try to righten the ship on Wednesday, September 23, at 4pm, when they host York College in continued CUNYAC play.