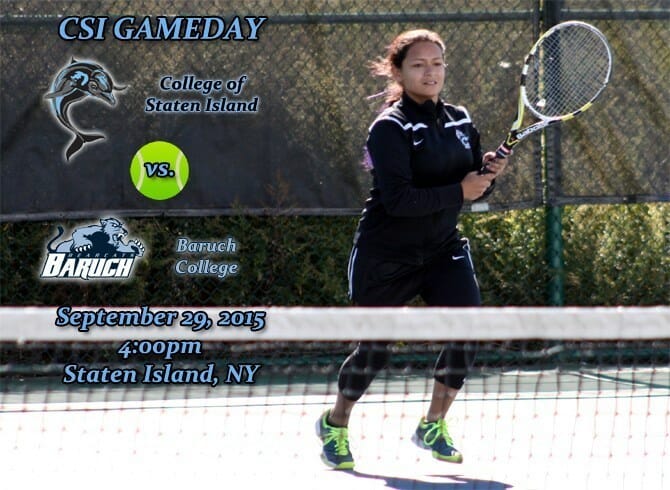 The College of Staten Island women’s tennis team is undefeated in conference play, and today the Dolphins will put it on the line, when they host Baruch College at the CSI Tennis Center at 4pm.  CSI is 6-1 overall on the season and have been idle for the past six days.  Today’s match against the Bearcats starts a busy week for the netters.

CSI vs. BARUCH COLLEGE AT-A-GLANCE
Matchup:  CSI (6-1 overall, 2-0 CUNYAC) vs. Baruch College (6-0 Overall, 3-0 CUNYAC)
Where:  CSI Tennis Center, 2800 Victory Blvd. Staten Island, NY
First Serve: 4:00 pm
Last Year’s Result:  CSI won 5-4
Players To Watch (CSI): Michelle Kushnir is coming off of an undefeated week in singles play last week and is hoping to parlay the success into another fierce week of competition.  CSI boasts a pair of undefeated doubles combinations this season, including the top pair of Sabrina Bragerton-Nasert and Madiha Mulla.
Players To Watch (BC):  Daria Vasekina is putting an undefeated mark on the line today.  She is 2-0 at #1 and 3-0 at #2 this season.  The same is true for Isabel Arias, who is 6-0 this season spread over Nos. 2-4 Singles flights.
News and Notes: Baruch has already matched their win total from all of last season and are the CUNYAC’s only undefeated team left.  The only common opponent between the teams is Brooklyn College.  The Bearcats hammered Brooklyn, 9-0, while the Dolphins won, 6-3.  CSI defeated Baruch last season, 5-4, despite defaulting on two flights.  They won four points in Singles, led by Bragerton-Nasert, Mulla, and Kushnir.