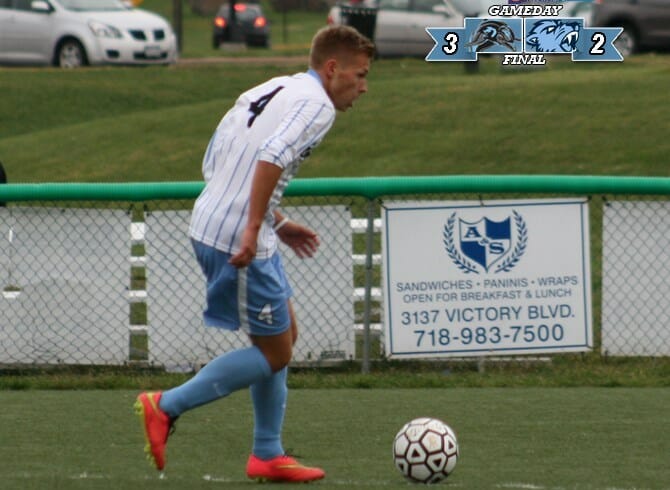 The College of Staten Island men’s soccer team won for the second straight time, and took their conference opener against its defending champion, using overtime to topple Baruch College, 3-2, in CUNYAC play at Metropolitan Oval in Maspeth, NY, this afternoon.  CSI improved to 2-7 overall and 1-0 within the CUNYAC, while the Bearcats fell to 2-3, 0-1, respectively.

In an extremely entertaining game that was even the entire way, both teams put on a show and there were plenty of highlights to go around.  For CSI, the team was trying to vindicate a loss at the hands of the Bearcats in last year’s CUNYAC Tournament, and certainly seemed determined to do so.

After both teams had quality chances, CSI was the team to register first, using the second goal of the season from Tarek Emam to do it.  Emam was sprung from a Brayan Evo pass, going one-on-one for the final few yards and beating Baruch keeper Xavier Carrillo at the 20:23 mark.

CSI’s lead would only last 2:08, as Baruch came right back.  Edward Humphries would slip a through ball behind the defense at teammate Myles Bent and after a failed attempt by the CSI defense to clear, Bent posted the goal to knot the score up at 1-1.

The game stayed this way until Baruch scored what many thought was a back-breaking goal with just 1:32 left to play in the first half.  Humphries scored the goal himself this time, heading it in off of a Mohammad Hamdani helper, putting Baruch up at halftime, 2-1.

In the second half, CSI put in reserve Marcin Klim, and the junior would make the Bearcats pay.  In the 53rd minute, CSI got a well-deserved equalizer, when Klim headed home a tally off of an Emmanuel Agboola cross, knotting the score at 2-2.  For the next 47 minutes, however, neither team could scratch a goal and both keepers made good saves to keep the other team off of the scoreboard.  At the end of 90 minutes, the game moved to overtime.

Just two minutes into the frame.  Agboola again found himself with the ball at his feet, and the freshman threaded a through-ball to Klim, who banged it home passed Carrillo, giving CSI the golden goal win, 3-2.

Baruch out-shot CSI 15-14, but the Dolphins had the better of the shots on goal at 9-3, while Baruch enjoyed a 6-1 edge in corner kicks.  For CSI, this was only their second win over Baruch in their last 11 tries dating back to 2008.

The Dolphins will keep their CUNYAC schedule going into next week, when they travel to Aviator Field in Brooklyn, NY, to take on Medgar Evers College on Wednesday, September 23, at 6pm.