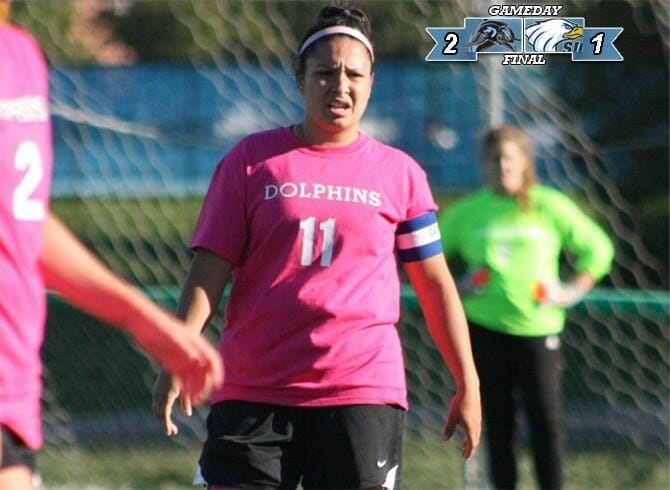 The College of Staten Island women’s soccer squad scored an impressive road win this evening, scoring a 2-1 win over St. Joseph’s College (LI) as part of non-league play in Patchogue, NY.  The win was the fifth-straight for CSI, and moved the team to 10-2 overall, while the Golden Eagles fell to 5-8-1.

Statistically the game seemed to swing in favor of the Eagles, who generated more chances, but it was CSI that was able to score the big tallies.  In the first half, both teams traded opportunities but CSI registered the lone goal.  Senior Samantha Wysokowski did the honors by connecting on a penalty shot against keeper Katie McGarrell in the 40th minute.  CSI keeper Kristy Colangelo kept the game tied with the final save of the period in the 43rd minute.

Things picked up in the second half.  McGarrell made two kick saves in net for SJC and then it was the Eagles that wrestled away momentum.  After several attempts, the team finally hit paydirt when Jessica Cordano connected from the top of the box on a feeder from Megan Leun, knotting the score at 1-1 at 56:35.

SJC barely had time to enjoy the tie, however, as CSI came right back.  Just 50 seconds later, Wysokowski sent a pass in to Danielle Smith, and Smith ran into the box and side-stepped McGarrell and pushed in an easy goal to put CSI right back on top, 2-1.

The score would stand up through the final 33 minutes.  SJC peppered the CSI net for the remainder of the match, but Colangelo answered the call.  CSI nearly made it 3-1 late in the game, but a Smith shot rattled off of the post, and right before the end of the game, Wysokowski did the same.

For the game SJC owned the final shot count, 24-12 (11-7 on goal), and led the corner kick count, 8-2.  Colangelo finished with 10 saves for CSI, while McGarrell made five in defeat.  Wysokowski’s seven shots led all players.

CSI will be back in action on Saturday, hosting Brooklyn College in their CUNYAC finale at 12 Noon at the CSI Soccer Complex.