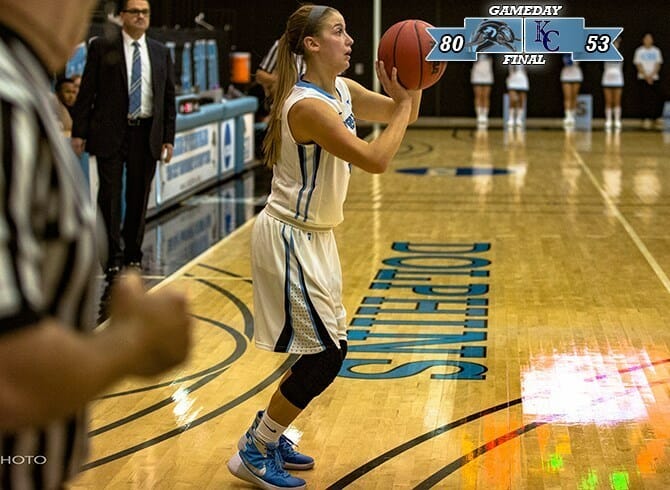 The College of Staten Island women’s basketball squad used aggressive defense to force 30 turnovers, and held the Giants to 30.2% shooting, in a one-sided, 80-53, win over Keystone College, as part of non-league play at the Sports & Recreation Center tonight.  The win, the fifth-straight for CSI, lifted the Dolphins to 6-3 overall, while Keystone fell to 4-5.

The story of the game from the outset was CSI’s ability to pound the ball inside, mixed their up-tempo and aggressive defense.  Coming off of forcing 37 turnovers two days ago against John Jay, CSI picked up right where they left off, and forced a series of Keystone turnovers to break open what was a 6-6 tie, into an 18-9 edge at the end of the first stanza.  Samantha Flecker powered for two inside drives on the 12-3 run to close the frame.  Nicole Vierno added another and Christina Pasaturo deposited a three to highlight the string of points.

KC’s Nina Hodanich scored the first eight points for her team in the second quarter, her second three whittled CSI’s lead down to 21-15 at 8:39 of the second quarter.  But CSI countered with an 8-2 run, sparked by two Rosa Perone layups.  CSI extended the lead to as many as 13 on a Mary Nnamani lay-up, before Keystone closed to 39-38 at the half.

The most important stretch of the game then came to start the third stanza.  Jamie Pifalo started the Dolphins off with a three, starting what was an 11-0 run to balloon CSI’s lead to 50-28 with 6:15 to go in the frame.  During the stretch, Keystone went 0-4 from the floor, 0-2 from the line, and committed four turnovers.  A layup and free-throws by Vierno powered CSI to as many as 25 in the frame, before CSI settled for the 22-point lead at the end of three frames.

Mired in poor shooting and turnover-prone, Keystone surrendered a 29-point lead before the eventual 27-point final difference was recorded.

All 12 CSI players who recorded minutes finished in the scoring column, led by Samantha Flecker’s 15 points, adding four rebounds and four assists.  Pasaturo ended with 14 points and three steals, while Vierno dumped in 11 points and three blocks in 17 minutes.  Destinee Hall led all Giants with 17 points and eight rebounds, while Hodanich finished with 9 points and 9 rebounds.  CSI lost the rebounding war, 47-41, but were a plus-14 in turnovers yielding only 16 to Keystone’s 30.  Despite the big final, CSI was a chilly 3-22 from beyond the arc (13.6%) and struggled from the free-throw line, making just 19-of-34 (55.9%).

CSI will have a long lay-off, returning to action on December 22, for a home date against William Paterson University, at 7pm.