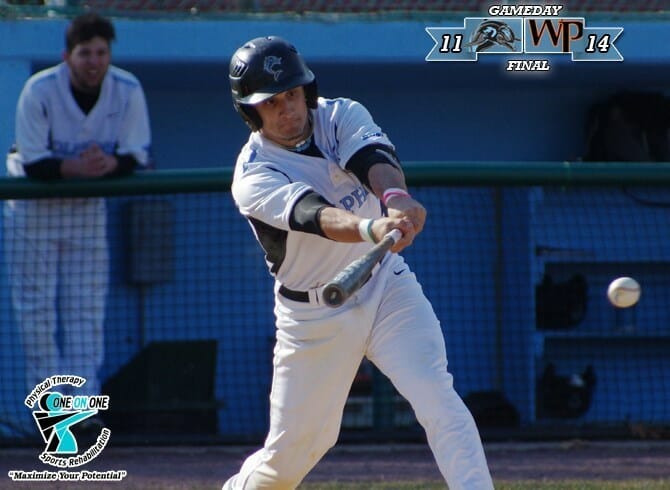 The College of Staten Island baseball squad saw a pair of big early leads get away ultimately falling on the road to William Paterson University by a 14-11 count in Wayne, NJ, as part of non-conference play.  CSI fell to 10-7 with the loss, while the Pioneers jumped to 11-7.  The offensive showcase featured 34 hits to go with eight errors.

CSI gave starter Chris Karnbach a nice 4-0 cushion after two innings of play.  Errors helped CSI plate their first two runs, and after Josh Mercado scored on a wild pitch, Joe Palmeri singled home another run to provide the early scoring.  Still, WPU would strike back with three runs in their half of the third inning, using a K.C. Abel two-run double to cut into the lead.  The Dolphins pounced back, scoring another three runs in their top of the fourth to go back up, 7-3.  Palmeri ripped another RBI-single and George Kantzian blasted 13th double of the young season to score another pair of runs.

The game then moved into the later rounds, and that’s when WPU made their move.  Surrendering a pair of lead-off base runners, Karnbach was lifted for Juan Rodriguez, but after registering an out, Abel notched a two-RBI single to make it 7-5.  Jimmy Kenny followed with an RBI single.  Josh Bernstein then came in for CSI, but an error in the field allowed the tying run to score.  Bernstein was able to induce an inning-ending groundout, but not before WPU tied the game at 7-7, going into the seventh inning.

CSI went quietly in their half of the inning, and the Pioneers took over.  A two-RBI double by Mike Abate would highlight a four-run inning and after seven frames, WPU led, 11-7.  Both teams notched a run in the eighth inning, and CSI had room for one final push in the ninth.  With two out, the Dolphins rallied to put two base runners on for Palmeri who ripped a single to score Frank Sconzo.  After a wild pitch and a walk to Kantzian, Frank Smith then roped in a two-RBI single to make it 14-11.  Bryan Kopko then came in to relieve, and was able to induce a Glenn Glennerster groundout to end the game.

CSI will be right back in action tomorrow when they return to the CSI Baseball Complex to take on The College of Mount Saint Vincent in a 5pm doubleheader.