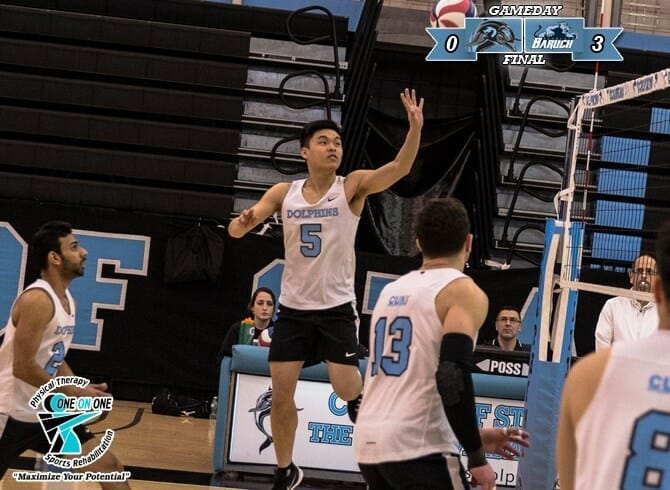 The College of Staten Island men’s volleyball season was officially put in the books tonight, as the No. 8 seeded Dolphins could not pull off the upset over top-seeded Baruch College as part of the CUNYAC/Pepsi Men’s Volleyball Championship Tournament, falling to the Bearcats at the ARC Arena, 3-0.  Baruch won the match by scores of 25-17, 25-16, and 25-17.  The loss finalized CSI’s season at 8-20 overall and 4-12 within the CUNYAC, while the Bearcats will move into semifinal play with a 17-12 overall and 15-1 CUNYAC mark.

The Dolphins would have a tough night all evening at the front of the net, mustering up just 12 kills on 46 attacks, while the Bearcats posted a healthy 36 kills on 77 total attacks, continuously keeping CSI off-balance.  The Bearcats also posted a whopping 21 service aces, using that to help build big advantages most of the night.

In the opening set, CSI was able to grab a modest, 6-4, advantage, and later led 8-6 before Baruch went on a big 10-0 run to shift momentum completely in their favor.  Four kills by Brady Ambro and two aces by Man Wai Choi powered the attack.  A kill by Justin Edwardsen helped narrow the deficit down to just five, 19-14, but Baruch continued to pepper away and take the opening set, 25-17.

Much like the opening set, again CSI stood neck-and-neck with the Bearcats in the early stages of the second stanza.  A pair of Baruch errors got CSI even at 8-8, but then Baruch responded again with a 7-0 run to pull ahead, 15-8, and later, two Scott Strandling aces gave Baruch a commanding 20-10 edge, leading to the 25-16 final.

The Bearcats closed well from there, getting out to a 7-2 advantage in the third set highlighted by two Ambro aces.  A Song Shin Low kill for CSI got the Dolphins closer later at 18-15, but Baruch righted the ship and was able to connect on some attacks and put the match away.

Strandling led all Bearcats attackers with 11 kills, adding five aces.  Ambro was sensational at the front with 10 kills and at the back line with a staggering 10 service aces.  Taylor Higgs led defensively with seven digs.  Edwardsen, Low, and Khaleeq Baum each shared the CSI lead with three kills, while Kevin Rosero led with four digs.

Despite the loss CSI was able to secure eight wins this season in only its second full season as a varsity status sport.  It hopes to provide for a springboard for more advanced play beginning next season.