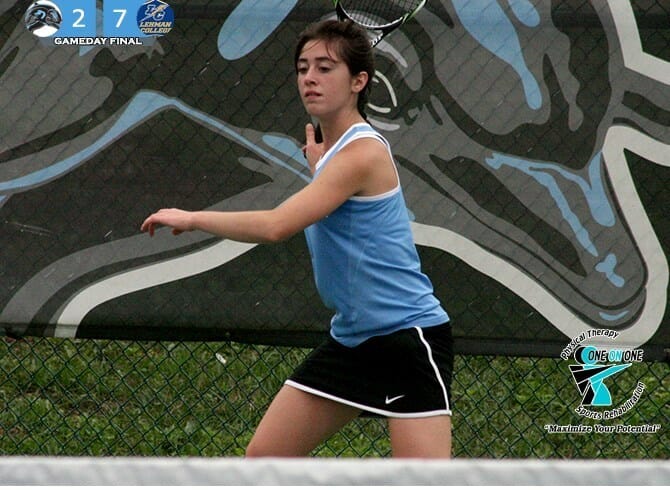 Playing in their second match in as many days the College of Staten Island women’s tennis team was this time on the receiving end of a tough loss, falling on the road against Lehman College by a 7-2 count in the Bronx, NY.  The Dolphins fell to 4-6 overall and 3-2 in CUNYAC play, while Lehman improved to 8-1, 2-1, respectively.

Due to illness the Dolphins were once again without top singles player Nozima Toshpulatova, so CSI’s lineup was shuffled to accommodate and it did prove well for the Dolphins.  Lehman took a huge 3-0 lead after doubles to start things off helped along by a pair of 8-0 wins from No. 1 doubles team Sacha Espiritu and Lizaveta Markouskaya, and No. 3 team Patricia Cadet and Toyoosi Adelbayo.  The No. 2 CSI team of Tristiana Adragna and Viktoriya Volkova fought valiantly, but ultimately came up short, 8-4, to LC’s Mami Aoki and Kanto Rasedoara.

When play came to single again Lehman had its way by taken four out of the six flights.  CSI’s only wins came at No. 2 with Adragna staying red-hot, winning her fourth straight, up in the lineup to boot,  6-2, 6-2, over Markouskaya.  A little further down, Diana Sanchez at No. 5 took another three-set winner in as many days, scoring a 6-3, 1-6, 13-11, marathon win over Elizaveta Ostanina.

CSI will now have some well-deserved time off, and when they do get back into action, they will take on Hunter College at the National Tennis Center on Tuesday, October 11, at 12pm.